Is WABCO Holdings Inc. (NYSE:WBC) a good stock to buy right now? We at Insider Monkey like to examine what billionaires and hedge funds think of a company before doing days of research on it. Given their 2 and 20 payment structure, hedge funds have more resources than the average investor. The funds have access to expert networks and get tips from industry insiders. They also have numerous Ivy League graduates and MBAs. Like everyone else, hedge funds perform miserably at times, but their consensus picks have historically outperformed the market after risk adjustments.

Is WABCO Holdings Inc. (NYSE:WBC) a buy here? The best stock pickers are in a bearish mood. The number of bullish hedge fund bets went down by 8 in recent months. Our calculations also showed that wbc isn’t among the 30 most popular stocks among hedge funds. WBC was in 15 hedge funds’ portfolios at the end of September. There were 23 hedge funds in our database with WBC positions at the end of the previous quarter.

What have hedge funds been doing with WABCO Holdings Inc. (NYSE:WBC)?

Heading into the fourth quarter of 2018, a total of 15 of the hedge funds tracked by Insider Monkey were bullish on this stock, a change of -35% from one quarter earlier. Below, you can check out the change in hedge fund sentiment towards WBC over the last 13 quarters. With hedgies’ sentiment swirling, there exists a select group of notable hedge fund managers who were upping their holdings considerably (or already accumulated large positions). 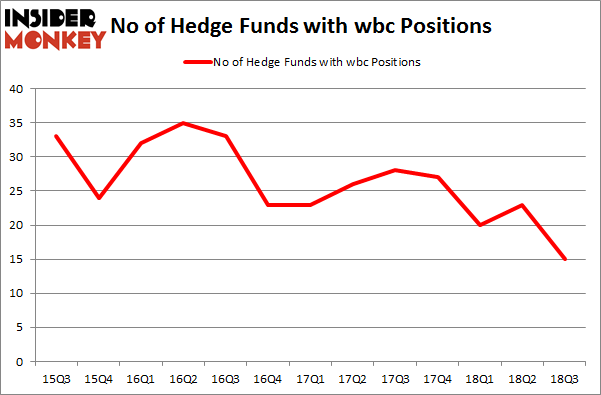 According to publicly available hedge fund and institutional investor holdings data compiled by Insider Monkey, Bob Peck and Andy Raab’s FPR Partners has the most valuable position in WABCO Holdings Inc. (NYSE:WBC), worth close to $460 million, comprising 10% of its total 13F portfolio. Coming in second is Renaissance Technologies, led by Jim Simons, holding a $32.2 million position; less than 0.1%% of its 13F portfolio is allocated to the company. Some other professional money managers that are bullish encompass Cliff Asness’s AQR Capital Management, Ken Griffin’s Citadel Investment Group and D. E. Shaw’s D E Shaw.

Since WABCO Holdings Inc. (NYSE:WBC) has witnessed declining sentiment from the smart money, logic holds that there lies a certain “tier” of money managers who were dropping their full holdings by the end of the third quarter. Intriguingly, Clint Murray’s Lodge Hill Capital said goodbye to the largest position of all the hedgies followed by Insider Monkey, worth an estimated $16 million in stock. Robert B. Gillam’s fund, McKinley Capital Management, also dropped its stock, about $7.4 million worth. These transactions are intriguing to say the least, as total hedge fund interest dropped by 8 funds by the end of the third quarter.

As you can see these stocks had an average of 12.5 hedge funds with bullish positions and the average amount invested in these stocks was $75 million. That figure was $590 million in WBC’s case. United Microelectronics Corp (NYSE:UMC) is the most popular stock in this table. On the other hand LG Display Co Ltd. (NYSE:LPL) is the least popular one with only 6 bullish hedge fund positions. WABCO Holdings Inc. (NYSE:WBC) is not the most popular stock in this group but hedge fund interest is still above average. This is a slightly positive signal but we’d rather spend our time researching stocks that hedge funds are piling on. In this regard UMC might be a better candidate to consider a long position.