It was a rough fourth quarter for many hedge funds, which were naturally unable to overcome the big dip in the broad market, as the S&P 500 fell by about 7% during October and average hedge fund losing about 3%. The Russell 2000, composed of smaller companies, performed even worse, trailing the S&P by about 4 percentage points during the first half of Q4, as investors fled less-known quantities for safe havens. This was the case with hedge funds, who we heard were pulling money from the market amid the volatility, which included money from small-cap stocks, which they invest in at a higher rate than other investors. This action contributed to the greater decline in these stocks during the tumultuous period. We will study how this market volatility affected their sentiment towards Vericel Corp (NASDAQ:VCEL) during the quarter below.

Hedge fund interest in Vericel Corp (NASDAQ:VCEL) shares was flat at the end of last quarter. This is usually a negative indicator. The level and the change in hedge fund popularity aren’t the only variables you need to analyze to decipher hedge funds’ perspectives. A stock may witness a boost in popularity but it may still be less popular than similarly priced stocks. That’s why at the end of this article we will examine companies such as DryShips Inc. (NASDAQ:DRYS), Earthstone Energy, Inc. (NYSE:ESTE), and Sterling Bancorp, Inc. (NASDAQ:SBT) to gather more data points.

What have hedge funds been doing with Vericel Corp (NASDAQ:VCEL)? 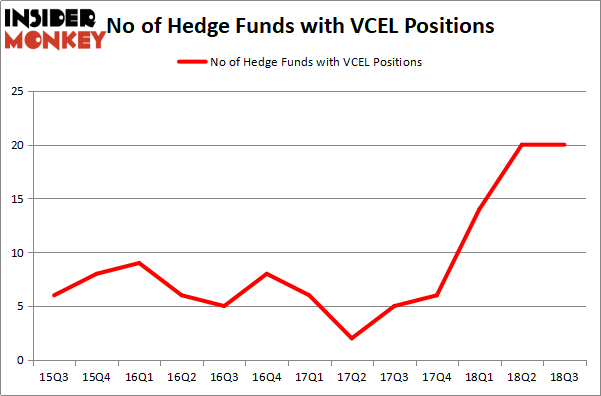 According to Insider Monkey’s hedge fund database, Mitchell Blutt’s Consonance Capital Management has the number one position in Vericel Corp (NASDAQ:VCEL), worth close to $59 million, amounting to 3.2% of its total 13F portfolio. Sitting at the No. 2 spot is Archon Capital Management, managed by Constantinos J. Christofilis, which holds a $29.3 million position; the fund has 11.5% of its 13F portfolio invested in the stock. Other peers with similar optimism contain James E. Flynn’s Deerfield Management, Richard Driehaus’s Driehaus Capital and Paul Marshall and Ian Wace’s Marshall Wace LLP.

Judging by the fact that Vericel Corp (NASDAQ:VCEL) has faced a decline in interest from the entirety of the hedge funds we track, it’s easy to see that there lies a certain “tier” of money managers that decided to sell off their entire stakes last quarter. Interestingly, Warren Lammert’s Granite Point Capital sold off the largest position of all the hedgies followed by Insider Monkey, comprising an estimated $2.4 million in stock. Anand Parekh’s fund, Alyeska Investment Group, also said goodbye to its stock, about $1.6 million worth. These moves are intriguing to say the least, as aggregate hedge fund interest stayed the same (this is a bearish signal in our experience).

As you can see these stocks had an average of 5.5 hedge funds with bullish positions and the average amount invested in these stocks was $26 million. That figure was $153 million in VCEL’s case. Ring Energy Inc (NYSEMKT:REI) is the most popular stock in this table. On the other hand DryShips Inc. (NASDAQ:DRYS) is the least popular one with only 2 bullish hedge fund positions. Compared to these stocks Vericel Corp (NASDAQ:VCEL) is more popular among hedge funds. Considering that hedge funds are fond of this stock in relation to its market cap peers, it may be a good idea to analyze it in detail and potentially include it in your portfolio.