Vera Bradley, Inc. (NASDAQ:VRA) has experienced an increase in activity from the world’s largest hedge funds recently. VRA was in 23 hedge funds’ portfolios at the end of September. There were 15 hedge funds in our database with VRA positions at the end of the previous quarter. Our calculations also showed that VRA isn’t among the 30 most popular stocks among hedge funds.

What have hedge funds been doing with Vera Bradley, Inc. (NASDAQ:VRA)? 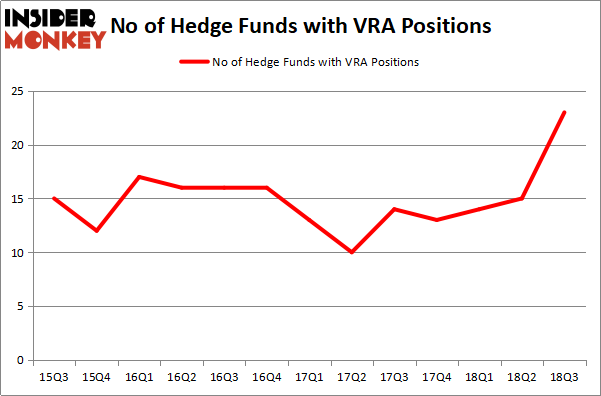 Among these funds, Renaissance Technologies held the most valuable stake in Vera Bradley, Inc. (NASDAQ:VRA), which was worth $27.3 million at the end of the third quarter. On the second spot was AQR Capital Management which amassed $13.2 million worth of shares. Moreover, Point72 Asset Management, Millennium Management, and Arrowstreet Capital were also bullish on Vera Bradley, Inc. (NASDAQ:VRA), allocating a large percentage of their portfolios to this stock.

As one would reasonably expect, some big names have jumped into Vera Bradley, Inc. (NASDAQ:VRA) headfirst. Think Investments, managed by Shashin Shah, established the biggest position in Vera Bradley, Inc. (NASDAQ:VRA). Think Investments had $6.2 million invested in the company at the end of the quarter. Frederick DiSanto’s Ancora Advisors also made a $3.5 million investment in the stock during the quarter. The following funds were also among the new VRA investors: Peter Algert and Kevin Coldiron’s Algert Coldiron Investors, Michael Platt and William Reeves’s BlueCrest Capital Mgmt., and Paul Marshall and Ian Wace’s Marshall Wace LLP.

As you can see these stocks had an average of 13.5 hedge funds with bullish positions and the average amount invested in these stocks was $88 million. That figure was $105 million in VRA’s case. 0 is the most popular stock in this table. On the other hand AC Immune SA (NASDAQ:ACIU) is the least popular one with only 9 bullish hedge fund positions. Compared to these stocks Vera Bradley, Inc. (NASDAQ:VRA) is more popular among hedge funds. Considering that hedge funds are fond of this stock in relation to its market cap peers, it may be a good idea to analyze it in detail and potentially include it in your portfolio.