Ubiquiti Networks Inc (NASDAQ:UBNT) was in 16 hedge funds’ portfolios at the end of September. UBNT investors should pay attention to an increase in hedge fund sentiment of late. There were 15 hedge funds in our database with UBNT holdings at the end of the previous quarter. Our calculations also showed that UBNT isn’t among the 30 most popular stocks among hedge funds.

What have hedge funds been doing with Ubiquiti Networks Inc (NASDAQ:UBNT)? 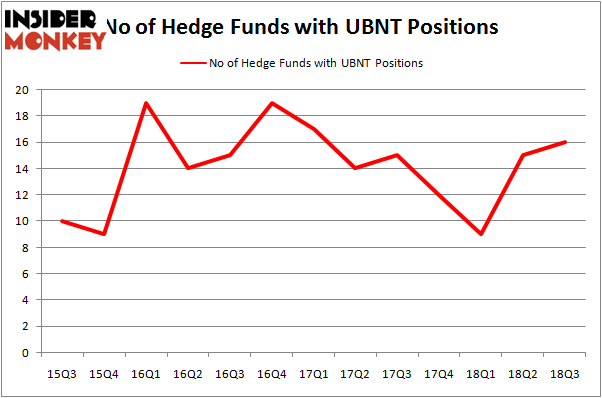 When looking at the institutional investors followed by Insider Monkey, Akre Capital Management, managed by Charles Akre, holds the number one position in Ubiquiti Networks Inc (NASDAQ:UBNT). Akre Capital Management has a $264.9 million position in the stock, comprising 3.1% of its 13F portfolio. Coming in second is Renaissance Technologies, led by Jim Simons, holding a $43.3 million position; the fund has less than 0.1%% of its 13F portfolio invested in the stock. Some other members of the smart money with similar optimism include Gregory Bylinsky and Jefferson Gramm’s Bandera Partners, and John Overdeck and David Siegel’s Two Sigma Advisors.

With a general bullishness amongst the heavyweights, key money managers were breaking ground themselves. Bandera Partners, managed by Gregory Bylinsky and Jefferson Gramm, created the most outsized position in Ubiquiti Networks Inc (NASDAQ:UBNT). Bandera Partners had $8.6 million invested in the company at the end of the quarter. David Costen Haley’s HBK Investments also initiated a $2.3 million position during the quarter. The following funds were also among the new UBNT investors: Joe DiMenna’s ZWEIG DIMENNA PARTNERS and Nick Thakore’s Diametric Capital.

As you can see these stocks had an average of 10.75 hedge funds with bullish positions and the average amount invested in these stocks was $184 million. That figure was $337 million in UBNT’s case. Carlisle Companies, Inc. (NYSE:CSL) is the most popular stock in this table. On the other hand Enable Midstream Partners LP (NYSE:ENBL) is the least popular one with only 4 bullish hedge fund positions. Ubiquiti Networks Inc (NASDAQ:UBNT) is not the most popular stock in this group but hedge fund interest is still above average. This is a slightly positive signal but we’d rather spend our time researching stocks that hedge funds are piling on. In this regard CSL might be a better candidate to consider a long position.