Looking for high-potential stocks? Just follow the big players within the hedge fund industry. Why should you do so? Let’s take a brief look at what statistics have to say about hedge funds’ stock picking abilities to illustrate. The Standard and Poor’s 500 Index returned approximately 7.6% in the 12 months ending November 21, with more than 51% of the stocks in the index failing to beat the benchmark. Therefore, the odds that one will pin down a winner by randomly picking a stock are less than the odds in a fair coin-tossing game. Conversely, best performing hedge funds’ 30 preferred mid-cap stocks generated a return of 18% during the same 12-month period. Coincidence? It might happen to be so, but it is unlikely. Our research covering a 17-year period indicates that hedge funds’ stock picks generate superior risk-adjusted returns. That’s why we believe it is wise to check hedge fund activity before you invest your time or your savings on a stock like Toyota Motor Corporation (ADR) (NYSE:TM) .

Is Toyota Motor Corporation (ADR) (NYSE:TM) a buy, sell, or hold? Investors who are in the know are altogether getting less bullish. The number of bullish hedge fund positions went down by 1 recently. There were 13 hedge funds in our database with TM holdings at the end of the previous quarter. The level and the change in hedge fund popularity aren’t the only variables you need to analyze to decipher hedge funds’ perspectives. A stock may witness a boost in popularity but it may still be less popular than similarly priced stocks. That’s why at the end of this article we will examine companies such as Novartis AG (ADR) (NYSE:NVS), The Coca-Cola Company (NYSE:KO), and Intel Corporation (NASDAQ:INTC) to gather more data points. 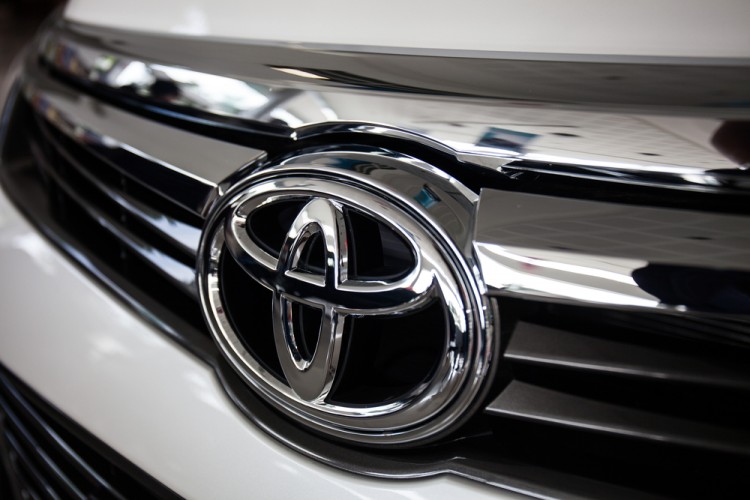 What have hedge funds been doing with Toyota Motor Corporation (ADR) (NYSE:TM)?

Heading into the fourth quarter of 2016, a total of 12 of the hedge funds tracked by Insider Monkey were long this stock, a change of -8% from the second quarter of 2016. On the other hand, there were a total of 13 hedge funds with a bullish position in TM at the beginning of this year. With hedgies’ sentiment swirling, there exists a select group of key hedge fund managers who were boosting their holdings substantially (or already accumulated large positions). 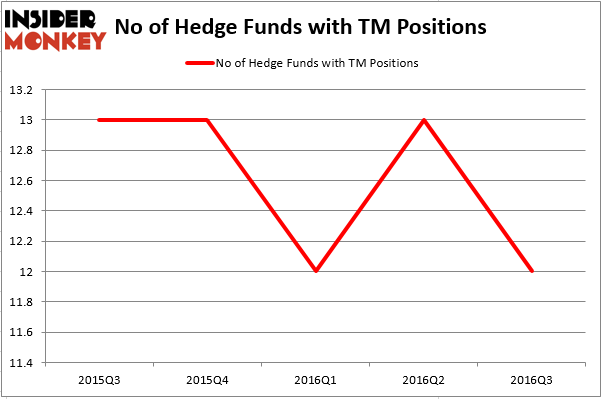 According to publicly available hedge fund and institutional investor holdings data compiled by Insider Monkey, Adage Capital Management, led by Phill Gross and Robert Atchinson, holds the biggest position in Toyota Motor Corporation (ADR) (NYSE:TM). Adage Capital Management has a $147.5 million position in the stock, comprising 0.4% of its 13F portfolio. The second largest stake is held by Renaissance Technologies, one of the biggest hedge funds in the world, holding a $114.8 million position; the fund has 0.2% of its 13F portfolio invested in the stock. Remaining peers with similar optimism consist of Ben Levine, Andrew Manuel and Stefan Renold’s LMR Partners, and Ken Fisher’s Fisher Asset Management. We should note that none of these elite funds are among our list of the 100 best performing hedge funds which is based on the performance of their 13F long positions in non-microcap stocks.

How AstraZeneca plc (ADR) (AZN) Stacks Up Against Its Peers
Monthly Newsletter Strategy
Download a free copy of our newsletter and see the details inside!
Hedge Fund Resource Center
Related News
Here’s What You Should Know About Toyota Motor Corporation (ADR) (TM) Hedge Funds Are Crazy About Toyota Motor Corporation (ADR) (TM) 11 Best Science YouTube Channels To Watch 10 Most Famous Cubist Paintings 5 Countries That Have the Most Drones
Billionaire Hedge Funds