We know that hedge funds generate strong, risk-adjusted returns over the long run, therefore imitating the picks that they are collectively bullish on can be a profitable strategy for retail investors. With billions of dollars in assets, smart money investors have to conduct complex analyses, spend many resources and use tools that are not always available for the general crowd. This doesn’t mean that they don’t have occasional colossal losses; they do (like Peltz’s recent General Electric losses). However, it is still good idea to keep an eye on hedge fund activity. With this in mind, as the current round of 13F filings has just ended, let’s examine the smart money sentiment towards Tidewater Inc. (NYSE:TDW).

Is Tidewater Inc. (NYSE:TDW) a first-rate investment right now? Prominent investors are taking a bullish view. The number of bullish hedge fund bets advanced by 2 in recent months, and the company was in 11 hedge funds’ portfolios at the end of September. Still, that number wasn’t even close for the company to be considered as one of the 30 most popular stocks among hedge funds in Q3 of 2018.

While researching about the stock further, we tracked Third Avenue Value Fund’s Portfolio Manager Commentary, in which this open-ended equity mutual fund talks about the latest company’s business moves. We bring you that part of the letter.

“Tidewater Inc. – During the quarter, Tidewater, which is the world’s largest operator of offshore service vessels reached an agreement to acquire smaller peer Gulfmark Offshore and continued to contribute strongly to Fund performance. Tidewater is in prime position to consolidate a beleaguered but recovering offshore supply vessel industry owing to its net cash balance sheet and right-sized cost structure, both of which were achieved through the bankruptcy process. Shortly after the Tidewater announcement, smaller industry peer Harvey Gulf International made a competing bid for Gulfmark, which is indicative of the amount of consolidation taking place in the offshore oil services industry today. We expect the Tidewater and Gulfmark transaction to close as announced and for the combined company to continue to be in a unique position to seek consolidation opportunities to build scale, efficiency and market positions into a strengthening market.”

In today’s marketplace there are dozens of formulas market participants can use to appraise their holdings. A pair of the most useful formulas are hedge fund and insider trading indicators. Our researchers have shown that, historically, those who follow the best picks of the top fund managers can beat their index-focused peers by a significant amount (see the details here).

What have hedge funds been doing with Tidewater Inc. (NYSE:TDW)?

At Q3’s end, a total of 11 of the hedge funds tracked by Insider Monkey held long positions in this stock, a change of 22% from the second quarter of 2018. The graph below displays the number of hedge funds with bullish position in TDW over the last 13 quarters. With the smart money’s sentiment swirling, there exists an “upper tier” of notable hedge fund managers who were upping their holdings significantly (or already accumulated large positions). 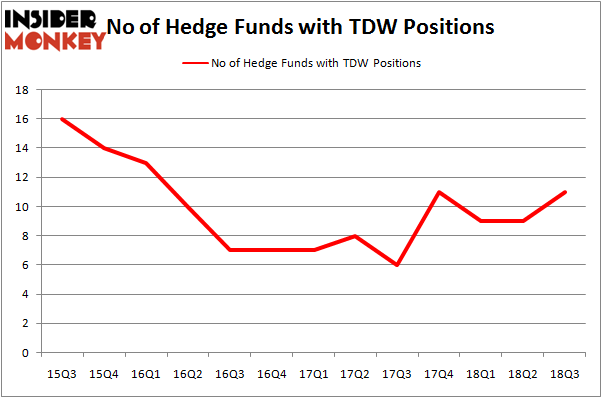 More specifically, Third Avenue Management was the largest shareholder of Tidewater Inc. (NYSE:TDW), with a stake worth $69.8 million reported as of the end of September. Trailing Third Avenue Management was DC Capital Partners, which amassed a stake valued at $5.5 million. Solus Alternative Asset Management, Two Sigma Advisors, and Marshall Wace LLP were also very fond of the stock, giving the stock large weights in their portfolios.

As you can see these stocks had an average of 9 hedge funds with bullish positions and the average amount invested in these stocks was $24 million. That figure was $89 million in TDW’s case. Addus Homecare Corporation (NASDAQ:ADUS) is the most popular stock in this table. On the other hand Blackrock MuniYield Quality Fund III, Inc. (NYSE:MYI) is the least popular one with only 3 bullish hedge fund positions. Tidewater Inc. (NYSE:TDW) is not the most popular stock in this group but hedge fund interest is still above average. This is a slightly positive signal but we’d rather spend our time researching stocks that hedge funds are piling on. In this regard ADUS might be a better candidate to consider a long position.