Looking for stocks with high upside potential? Just follow the big players within the hedge fund industry. Why should you do so? Let’s take a brief look at what statistics have to say about hedge funds’ stock picking abilities to illustrate. The Standard and Poor’s 500 Index returned approximately 5.7% in the 12 months ending October 26 (including dividend payments). Conversely, hedge funds’ 30 preferred S&P 500 stocks (as of June 2014) generated a return of 15.1% during the same 12-month period, with 53% of these stock picks outperforming the broader market benchmark. Coincidence? It might happen to be so, but it is unlikely. Our research covering the last 18 years indicates that hedge funds’ stock picks generate superior risk-adjusted returns. That’s why we believe it is wise to check hedge fund activity before you invest your time or your savings on a stock like The Mosaic Company (NYSE:MOS).

The Mosaic Company (NYSE:MOS) was in 34 hedge funds’ portfolios at the end of the third quarter of 2018. MOS investors should pay attention to an increase in activity from the world’s largest hedge funds of late. There were 29 hedge funds in our database with MOS positions at the end of the previous quarter. Our calculations also showed that mos isn’t among the 30 most popular stocks among hedge funds.

Heading into the fourth quarter of 2018, a total of 34 of the hedge funds tracked by Insider Monkey were bullish on this stock, a change of 17% from one quarter earlier. Below, you can check out the change in hedge fund sentiment towards MOS over the last 13 quarters. So, let’s find out which hedge funds were among the top holders of the stock and which hedge funds were making big moves. 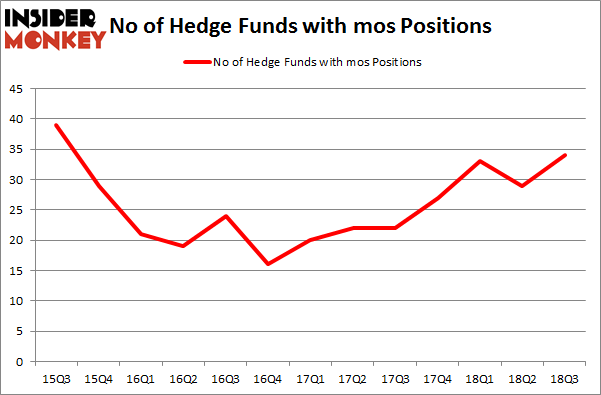 When looking at the institutional investors followed by Insider Monkey, Adage Capital Management, managed by Phill Gross and Robert Atchinson, holds the number one position in The Mosaic Company (NYSE:MOS). Adage Capital Management has a $292.3 million position in the stock, comprising 0.7% of its 13F portfolio. Sitting at the No. 2 spot is Slate Path Capital, led by David Greenspan, holding a $125.2 million position; the fund has 16.8% of its 13F portfolio invested in the stock. Remaining members of the smart money with similar optimism include Ken Griffin’s Citadel Investment Group, Steven Richman’s East Side Capital (RR Partners) and Dmitry Balyasny’s Balyasny Asset Management.

As one would reasonably expect, key hedge funds were leading the bulls’ herd. Polar Capital, managed by Brian Ashford-Russell and Tim Woolley, established the most valuable position in The Mosaic Company (NYSE:MOS). Polar Capital had $30 million invested in the company at the end of the quarter. Charles Davidson and Joseph Jacobs’s Wexford Capital also made a $12.9 million investment in the stock during the quarter. The following funds were also among the new MOS investors: Paul Marshall and Ian Wace’s Marshall Wace LLP, Ray Dalio’s Bridgewater Associates, and Louis Bacon’s Moore Global Investments.

Let’s check out hedge fund activity in other stocks – not necessarily in the same industry as The Mosaic Company (NYSE:MOS) but similarly valued. We will take a look at EnCana Corporation (NYSE:ECA), PTC Inc (NASDAQ:PTC), Cincinnati Financial Corporation (NASDAQ:CINF), and Advance Auto Parts, Inc. (NYSE:AAP). This group of stocks’ market caps are similar to MOS’s market cap.

As you can see these stocks had an average of 31.75 hedge funds with bullish positions and the average amount invested in these stocks was $1.50 billion. That figure was $832 million in MOS’s case. PTC Inc (NASDAQ:PTC) is the most popular stock in this table. On the other hand Cincinnati Financial Corporation (NASDAQ:CINF) is the least popular one with only 11 bullish hedge fund positions. The Mosaic Company (NYSE:MOS) is not the most popular stock in this group but hedge fund interest is still above average. This is a slightly positive signal but we’d rather spend our time researching stocks that hedge funds are piling on. In this regard PTC might be a better candidate to consider a long position.