A market correction in the fourth quarter, spurred by a number of global macroeconomic concerns and rising interest rates ended up having a negative impact on the markets and many hedge funds as a result. The stocks of smaller companies were especially hard hit during this time as investors fled to investments seen as being safer. This is evident in the fact that the Russell 2000 ETF underperformed the S&P 500 ETF by 4 percentage points during the first half of the fourth quarter. We also received indications that hedge funds were trimming their positions amid the market volatility and uncertainty, and given their greater inclination towards smaller cap stocks than other investors, it follows that a stronger sell-off occurred in those stocks. Let’s study the hedge fund sentiment to see how those concerns affected their ownership of Texas Roadhouse Inc (NASDAQ:TXRH) during the quarter.

Texas Roadhouse Inc (NASDAQ:TXRH) was in 19 hedge funds’ portfolios at the end of the third quarter of 2018. TXRH investors should pay attention to an increase in hedge fund interest recently. There were 16 hedge funds in our database with TXRH positions at the end of the previous quarter. Our calculations also showed that TXRH isn’t among the 30 most popular stocks among hedge funds.

If you’d ask most investors, hedge funds are seen as unimportant, outdated investment tools of yesteryear. While there are greater than 8,000 funds trading at the moment, Our experts look at the moguls of this club, approximately 700 funds. It is estimated that this group of investors oversee the lion’s share of all hedge funds’ total asset base, and by paying attention to their unrivaled investments, Insider Monkey has determined several investment strategies that have historically surpassed the S&P 500 index. Insider Monkey’s flagship hedge fund strategy defeated the S&P 500 index by 6 percentage points per annum since its inception in May 2014 through early November 2018. We were able to generate large returns even by identifying short candidates. Our portfolio of short stocks lost 24% since February 2017 (through December 3rd) even though the market was up nearly 23% during the same period. We just shared a list of 11 short targets in our latest quarterly update.

What have hedge funds been doing with Texas Roadhouse Inc (NASDAQ:TXRH)?

At the end of the third quarter, a total of 19 of the hedge funds tracked by Insider Monkey were long this stock, a change of 19% from the second quarter of 2018. Below, you can check out the change in hedge fund sentiment towards TXRH over the last 13 quarters. With the smart money’s positions undergoing their usual ebb and flow, there exists an “upper tier” of key hedge fund managers who were upping their holdings substantially (or already accumulated large positions). 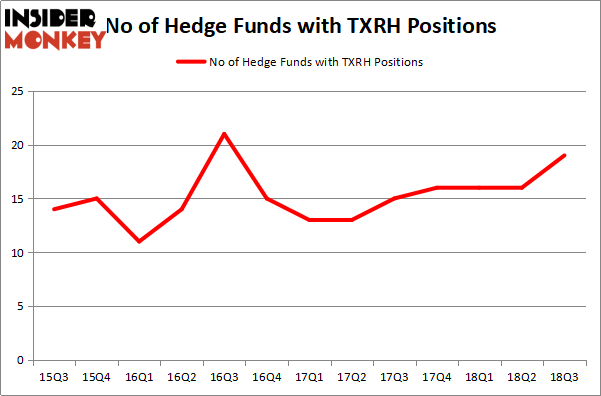 The largest stake in Texas Roadhouse Inc (NASDAQ:TXRH) was held by AQR Capital Management, which reported holding $20.3 million worth of stock at the end of September. It was followed by Maverick Capital with a $14.2 million position. Other investors bullish on the company included Marshall Wace LLP, Citadel Investment Group, and Two Sigma Advisors.

Let’s now take a look at hedge fund activity in other stocks – not necessarily in the same industry as Texas Roadhouse Inc (NASDAQ:TXRH) but similarly valued. We will take a look at Insperity Inc (NYSE:NSP), Blackbaud, Inc. (NASDAQ:BLKB), Pegasystems Inc. (NASDAQ:PEGA), and Kirby Corporation (NYSE:KEX). All of these stocks’ market caps match TXRH’s market cap.

As you can see these stocks had an average of 16.75 hedge funds with bullish positions and the average amount invested in these stocks was $418 million. That figure was $77 million in TXRH’s case. Pegasystems Inc. (NASDAQ:PEGA) is the most popular stock in this table. On the other hand Blackbaud, Inc. (NASDAQ:BLKB) is the least popular one with only 13 bullish hedge fund positions. Texas Roadhouse Inc (NASDAQ:TXRH) is not the most popular stock in this group but hedge fund interest is still above average. This is a slightly positive signal but we’d rather spend our time researching stocks that hedge funds are piling on. In this regard PEGA might be a better candidate to consider a long position.