Is Symantec Corporation (NASDAQ:SYMC) a buy right now? Hedge funds are taking an optimistic view. The number of long hedge fund positions rose by 8 lately. Our calculations also showed that symc isn’t among the 30 most popular stocks among hedge funds. SYMC was in 33 hedge funds’ portfolios at the end of September. There were 25 hedge funds in our database with SYMC positions at the end of the previous quarter.

If you’d ask most stock holders, hedge funds are perceived as slow, outdated financial vehicles of the past. While there are over 8,000 funds in operation today, Our researchers look at the masters of this group, around 700 funds. It is estimated that this group of investors oversee the lion’s share of the hedge fund industry’s total asset base, and by keeping an eye on their finest equity investments, Insider Monkey has figured out many investment strategies that have historically outpaced the broader indices. Insider Monkey’s flagship hedge fund strategy surpassed the S&P 500 index by 6 percentage points a year since its inception in May 2014 through early November 2018. We were able to generate large returns even by identifying short candidates. Our portfolio of short stocks lost 24% since February 2017 (through December 3rd) even though the market was up nearly 23% during the same period. We just shared a list of 11 short targets in our latest quarterly update.

What have hedge funds been doing with Symantec Corporation (NASDAQ:SYMC)?

Heading into the fourth quarter of 2018, a total of 33 of the hedge funds tracked by Insider Monkey held long positions in this stock, a change of 32% from one quarter earlier. Below, you can check out the change in hedge fund sentiment towards SYMC over the last 13 quarters. So, let’s examine which hedge funds were among the top holders of the stock and which hedge funds were making big moves. 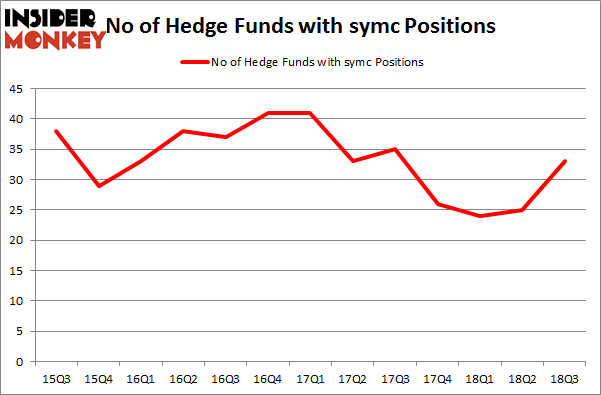 Among these funds, Starboard Value LP held the most valuable stake in Symantec Corporation (NASDAQ:SYMC), which was worth $521.4 million at the end of the third quarter. On the second spot was Orbis Investment Management which amassed $202.7 million worth of shares. Moreover, Glenview Capital, Eminence Capital, and D E Shaw were also bullish on Symantec Corporation (NASDAQ:SYMC), allocating a large percentage of their portfolios to this stock.

Now, key hedge funds were leading the bulls’ herd. Starboard Value LP, managed by Jeffrey Smith, assembled the most valuable position in Symantec Corporation (NASDAQ:SYMC). Starboard Value LP had $521.4 million invested in the company at the end of the quarter. Larry Robbins’s Glenview Capital also made a $133.7 million investment in the stock during the quarter. The following funds were also among the new SYMC investors: Leon Shaulov’s Maplelane Capital, Steve Cohen’s Point72 Asset Management, and Kenneth Squire’s 13D Management.

Let’s now take a look at hedge fund activity in other stocks – not necessarily in the same industry as Symantec Corporation (NASDAQ:SYMC) but similarly valued. These stocks are Old Dominion Freight Line, Inc. (NASDAQ:ODFL), AEGON N.V. (NYSE:AEG), CarMax Inc (NYSE:KMX), and Dover Corporation (NYSE:DOV). All of these stocks’ market caps are similar to SYMC’s market cap.

As you can see these stocks had an average of 21.25 hedge funds with bullish positions and the average amount invested in these stocks was $827 million. That figure was $1.47 billion in SYMC’s case. CarMax Inc (NYSE:KMX) is the most popular stock in this table. On the other hand AEGON N.V. (NYSE:AEG) is the least popular one with only 7 bullish hedge fund positions. Compared to these stocks Symantec Corporation (NASDAQ:SYMC) is more popular among hedge funds. Considering that hedge funds are fond of this stock in relation to its market cap peers, it may be a good idea to analyze it in detail and potentially include it in your portfolio.