Is SRC Energy Inc. (NYSE:SRCI) a healthy stock for your portfolio? Investors who are in the know are getting more bullish. The number of long hedge fund bets improved by 2 lately. Our calculations also showed that srci isn’t among the 30 most popular stocks among hedge funds. SRCI was in 15 hedge funds’ portfolios at the end of September. There were 13 hedge funds in our database with SRCI positions at the end of the previous quarter.

What have hedge funds been doing with SRC Energy Inc. (NYSE:SRCI)?

Heading into the fourth quarter of 2018, a total of 15 of the hedge funds tracked by Insider Monkey were bullish on this stock, a change of 15% from the second quarter of 2018. By comparison, 12 hedge funds held shares or bullish call options in SRCI heading into this year. With the smart money’s positions undergoing their usual ebb and flow, there exists a select group of key hedge fund managers who were increasing their holdings considerably (or already accumulated large positions). 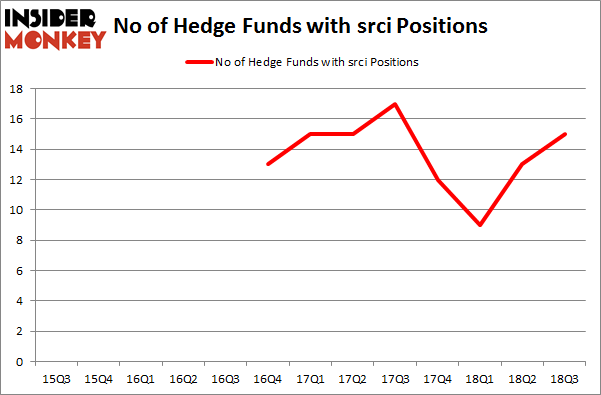 With a general bullishness amongst the heavyweights, some big names were breaking ground themselves. Millennium Management, managed by Israel Englander, established the biggest position in SRC Energy Inc. (NYSE:SRCI). Millennium Management had $18.7 million invested in the company at the end of the quarter. Steve Cohen’s Point72 Asset Management also made a $5.2 million investment in the stock during the quarter. The other funds with brand new SRCI positions are Dmitry Balyasny’s Balyasny Asset Management, John M. Angelo and Michael L. Gordon’s Angelo Gordon & Co, and Brandon Haley’s Holocene Advisors.

As you can see these stocks had an average of 13.75 hedge funds with bullish positions and the average amount invested in these stocks was $166 million. That figure was $367 million in SRCI’s case. Steelcase Inc. (NYSE:SCS) is the most popular stock in this table. On the other hand trivago N.V. (NASDAQ:TRVG) is the least popular one with only 9 bullish hedge fund positions. SRC Energy Inc. (NYSE:SRCI) is not the most popular stock in this group but hedge fund interest is still above average. This is a slightly positive signal but we’d rather spend our time researching stocks that hedge funds are piling on. In this regard SCS might be a better candidate to consider a long position.