As we already know from media reports and hedge fund investor letters, many hedge funds lost money in October, blaming macroeconomic conditions and unpredictable events that hit several sectors, with healthcare among them. Nevertheless, most investors decided to stick to their bullish theses and their long-term focus allows us to profit from the recent declines. In particular, let’s take a look at what hedge funds think about Spectrum Brands Holdings, Inc. (NYSE:SPB) in this article.

Is Spectrum Brands Holdings, Inc. (NYSE:SPB) a buy right now? The smart money is taking a bullish view. The number of bullish hedge fund positions went up by 4 lately. Our calculations also showed that spb isn’t among the 30 most popular stocks among hedge funds.

In today’s marketplace there are a large number of methods stock market investors employ to assess stocks. A duo of the most useful methods are hedge fund and insider trading indicators. Our researchers have shown that, historically, those who follow the top picks of the top money managers can beat the market by a solid amount (see the details here).

How have hedgies been trading Spectrum Brands Holdings, Inc. (NYSE:SPB)? 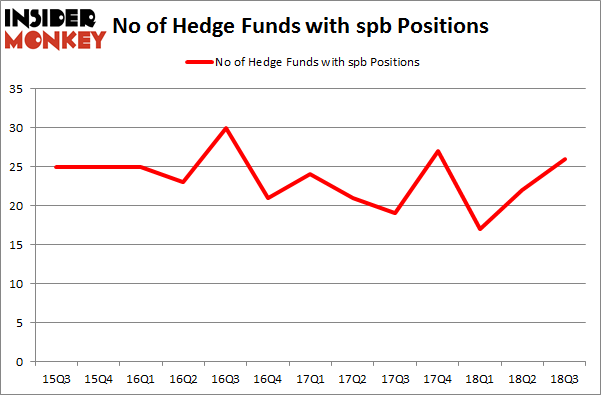 More specifically, Leucadia National was the largest shareholder of Spectrum Brands Holdings, Inc. (NYSE:SPB), with a stake worth $561.5 million reported as of the end of September. Trailing Leucadia National was Cardinal Capital, which amassed a stake valued at $67.8 million. Citadel Investment Group, Governors Lane, and Millennium Management were also very fond of the stock, giving the stock large weights in their portfolios.

As you can see these stocks had an average of 14.75 hedge funds with bullish positions and the average amount invested in these stocks was $131 million. That figure was $915 million in SPB’s case. TCF Financial Corporation (NYSE:TCF) is the most popular stock in this table. On the other hand iShares MSCI All Country Asia ex Japan Index Fund (NASDAQ:AAXJ) is the least popular one with only 1 bullish hedge fund positions. Compared to these stocks Spectrum Brands Holdings, Inc. (NYSE:SPB) is more popular among hedge funds. Considering that hedge funds are fond of this stock in relation to its market cap peers, it may be a good idea to analyze it in detail and potentially include it in your portfolio.