Before we spend many hours researching a company, we’d like to analyze what insiders, hedge funds and billionaire investors think of the stock first. We would like to do so because the elite investors’ consensus returns have been exceptional. In the following paragraphs, we find out what the billionaire investors and hedge funds think of Solaris Oilfield Infrastructure, Inc. (NYSE:SOI).

Is Solaris Oilfield Infrastructure, Inc. (NYSE:SOI) an exceptional investment now? Investors who are in the know are taking a bearish view. The number of long hedge fund positions went down by 1 recently. Our calculations also showed that SOI isn’t among the 30 most popular stocks among hedge funds. SOI was in 14 hedge funds’ portfolios at the end of September. There were 15 hedge funds in our database with SOI holdings at the end of the previous quarter.

What have hedge funds been doing with Solaris Oilfield Infrastructure, Inc. (NYSE:SOI)? 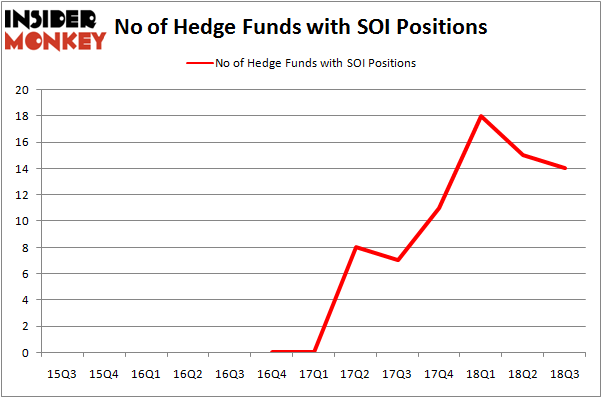 When looking at the institutional investors followed by Insider Monkey, Phill Gross and Robert Atchinson’s Adage Capital Management has the largest position in Solaris Oilfield Infrastructure, Inc. (NYSE:SOI), worth close to $18 million, accounting for less than 0.1%% of its total 13F portfolio. Coming in second is Encompass Capital Advisors, managed by Todd J. Kantor, which holds a $13.6 million position; 1.2% of its 13F portfolio is allocated to the company. Other peers that hold long positions encompass Richard Driehaus’s Driehaus Capital, John Osterweis’s Osterweis Capital Management and Mason Hawkins’s Southeastern Asset Management.

Since Solaris Oilfield Infrastructure, Inc. (NYSE:SOI) has faced a decline in interest from the entirety of the hedge funds we track, it’s easy to see that there was a specific group of hedge funds who sold off their positions entirely by the end of the third quarter. At the top of the heap, Malcolm Fairbairn’s Ascend Capital dumped the biggest position of the “upper crust” of funds tracked by Insider Monkey, comprising close to $2.6 million in stock. Peter Rathjens, Bruce Clarke and John Campbell’s fund, Arrowstreet Capital, also sold off its stock, about $2.3 million worth. These moves are important to note, as total hedge fund interest was cut by 1 funds by the end of the third quarter.

As you can see these stocks had an average of 11.75 hedge funds with bullish positions and the average amount invested in these stocks was $234 million. That figure was $81 million in SOI’s case. InflaRx N.V. (NASDAQ:IFRX) is the most popular stock in this table. On the other hand Origin Bancorp, Inc. (NASDAQ:OBNK) is the least popular one with only 6 bullish hedge fund positions. Solaris Oilfield Infrastructure, Inc. (NYSE:SOI) is not the most popular stock in this group but hedge fund interest is still above average. This is a slightly positive signal but we’d rather spend our time researching stocks that hedge funds are piling on. In this regard IFRX might be a better candidate to consider a long position.