The government requires hedge funds and wealthy investors with over a certain portfolio size to file a report that shows their positions at the end of every quarter. Even though it isn’t the intention, these filings level the playing field for ordinary investors. The latest round of 13F filings disclosed the funds’ positions on September 30. We at Insider Monkey have made an extensive database of more than 700 of those elite funds and prominent investors’ filings. In this article, we analyze how these elite funds and prominent investors traded SiteOne Landscape Supply, Inc. (NYSE:SITE) based on those filings.

SiteOne Landscape Supply, Inc. (NYSE:SITE) shareholders have witnessed an increase in support from the world’s most elite money managers lately. SITE was in 15 hedge funds’ portfolios at the end of September. There were 11 hedge funds in our database with SITE holdings at the end of the previous quarter. Our calculations also showed that site isn’t among the 30 most popular stocks among hedge funds.

What does the smart money think about SiteOne Landscape Supply, Inc. (NYSE:SITE)? 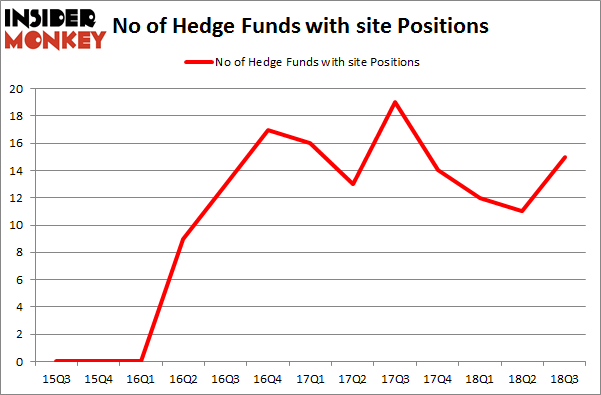 The largest stake in SiteOne Landscape Supply, Inc. (NYSE:SITE) was held by ThornTree Capital Partners, which reported holding $29.6 million worth of stock at the end of September. It was followed by Ascend Capital with a $16.8 million position. Other investors bullish on the company included Carlson Capital, Blue Mountain Capital, and Latimer Light Capital.

As one would reasonably expect, key money managers were leading the bulls’ herd. Ascend Capital, managed by Malcolm Fairbairn, initiated the most outsized position in SiteOne Landscape Supply, Inc. (NYSE:SITE). Ascend Capital had $16.8 million invested in the company at the end of the quarter. Clint Carlson’s Carlson Capital also initiated a $15.8 million position during the quarter. The other funds with brand new SITE positions are Andrew Feldstein and Stephen Siderow’s Blue Mountain Capital, Mark Kingdon’s Kingdon Capital, and Israel Englander’s Millennium Management.

As you can see these stocks had an average of 16.75 hedge funds with bullish positions and the average amount invested in these stocks was $186 million. That figure was $109 million in SITE’s case. Penn National Gaming, Inc (NASDAQ:PENN) is the most popular stock in this table. On the other hand Brookfield Business Partners L.P. (NYSE:BBU) is the least popular one with only 6 bullish hedge fund positions. SiteOne Landscape Supply, Inc. (NYSE:SITE) is not the least popular stock in this group but hedge fund interest is still below average. This is a slightly negative signal and we’d rather spend our time researching stocks that hedge funds are piling on. In this regard PENN might be a better candidate to consider a long position.

Is Eidos Therapeutics, Inc. (EIDX) A Good Stock To Buy?
Monthly Newsletter Strategy
Download a free copy of our newsletter and see the details inside!
Hedge Fund Resource Center
Related News
Should You Buy SiteOne Landscape Supply Inc (SITE)? A Look at Five Stocks in Spotlight on Wednesday 10 Best Vacation Spots for Singles in Their 40’s 15 Highest Paid YouTubers of 2018 16 Good Excuses to Miss Work for a Few Days
Billionaire Hedge Funds