While the market driven by short-term sentiment influenced by uncertainty regarding the future of the interest rate environment in the US, declining oil prices and the trade war with China, many smart money investors are keeping their optimism regarding the current bull run, while still hedging many of their long positions. However, as we know, big investors usually buy stocks with strong fundamentals, which is why we believe we can profit from imitating them. In this article, we are going to take a look at the smart money sentiment surrounding Senior Housing Properties Trust (NASDAQ:SNH).

Is Senior Housing Properties Trust (NASDAQ:SNH) the right investment to pursue these days? The best stock pickers are taking an optimistic view. The number of long hedge fund bets went up by 1 lately. Our calculations also showed that SNH isn’t among the 30 most popular stocks among hedge funds. SNH was in 13 hedge funds’ portfolios at the end of the third quarter of 2018. There were 12 hedge funds in our database with SNH positions at the end of the previous quarter.

At the end of the third quarter, a total of 13 of the hedge funds tracked by Insider Monkey were bullish on this stock, a change of 8% from the previous quarter. Below, you can check out the change in hedge fund sentiment towards SNH over the last 13 quarters. With hedge funds’ sentiment swirling, there exists a few noteworthy hedge fund managers who were increasing their holdings significantly (or already accumulated large positions). 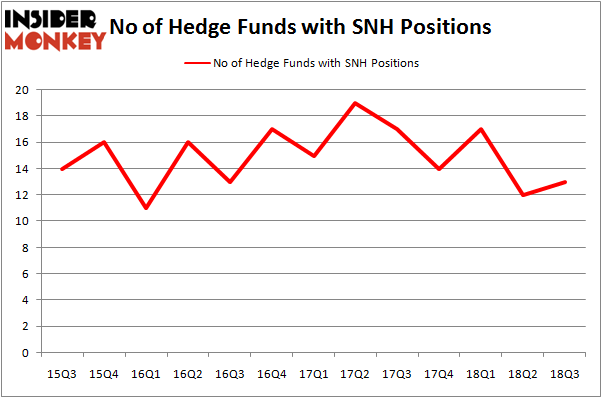 Among these funds, Renaissance Technologies held the most valuable stake in Senior Housing Properties Trust (NASDAQ:SNH), which was worth $25.7 million at the end of the third quarter. On the second spot was Millennium Management which amassed $14.5 million worth of shares. Moreover, Two Sigma Advisors, GLG Partners, and Stevens Capital Management were also bullish on Senior Housing Properties Trust (NASDAQ:SNH), allocating a large percentage of their portfolios to this stock.

As industrywide interest jumped, specific money managers were leading the bulls’ herd. Balyasny Asset Management, managed by Dmitry Balyasny, initiated the biggest position in Senior Housing Properties Trust (NASDAQ:SNH). Balyasny Asset Management had $0.5 million invested in the company at the end of the quarter. Ken Griffin’s Citadel Investment Group also made a $0.3 million investment in the stock during the quarter.

As you can see these stocks had an average of 22 hedge funds with bullish positions and the average amount invested in these stocks was $346 million. That figure was $66 million in SNH’s case. GDS Holdings Limited (NASDAQ:GDS) is the most popular stock in this table. On the other hand On ASGN Incorporated (NYSE:ASGN) is the least popular one with only 18 bullish hedge fund positions. Compared to these stocks Senior Housing Properties Trust (NASDAQ:SNH) is even less popular than ASGN. Considering that hedge funds aren’t fond of this stock in relation to other companies analyzed in this article, it may be a good idea to analyze it in detail and understand why the smart money isn’t behind this stock. This isn’t necessarily bad news. Although it is possible that hedge funds may think the stock is overpriced and view the stock as a short candidate, they may not be very familiar with the bullish thesis. In either case more research is warranted.