It is already common knowledge that individual investors do not usually have the necessary resources and abilities to properly research an investment opportunity. As a result, most investors pick their illusory “winners” by making a superficial analysis and research that leads to poor performance on aggregate. Since stock returns aren’t usually symmetrically distributed and index returns are more affected by a few outlier stocks (i.e. the FAANG stocks dominating and driving S&P 500 Index’s returns in recent years), more than 50% of the constituents of the Standard and Poor’s 500 Index underperform the benchmark. Hence, if you randomly pick a stock, there is more than 50% chance that you’d fail to beat the market. At the same time, the 30 most favored S&P 500 stocks by the hedge funds monitored by Insider Monkey generated a return of 15.1% over the last 12 months (vs. 5.6% gain for SPY), with 53% of these stocks outperforming the benchmark. Of course, hedge funds do make wrong bets on some occasions and these get disproportionately publicized on financial media, but piggybacking their moves can beat the broader market on average. That’s why we are going to go over recent hedge fund activity in SendGrid, Inc. (NYSE:SEND).

SendGrid, Inc. (NYSE:SEND) was in 20 hedge funds’ portfolios at the end of the third quarter of 2018. SEND shareholders have witnessed an increase in support from the world’s most elite money managers lately. There were 12 hedge funds in our database with SEND holdings at the end of the previous quarter. Our calculations also showed that send isn’t among the 30 most popular stocks among hedge funds.

To the average investor there are many indicators stock traders employ to size up stocks. Two of the less utilized indicators are hedge fund and insider trading indicators. Our experts have shown that, historically, those who follow the top picks of the best hedge fund managers can beat the S&P 500 by a solid margin (see the details here).

What have hedge funds been doing with SendGrid, Inc. (NYSE:SEND)? 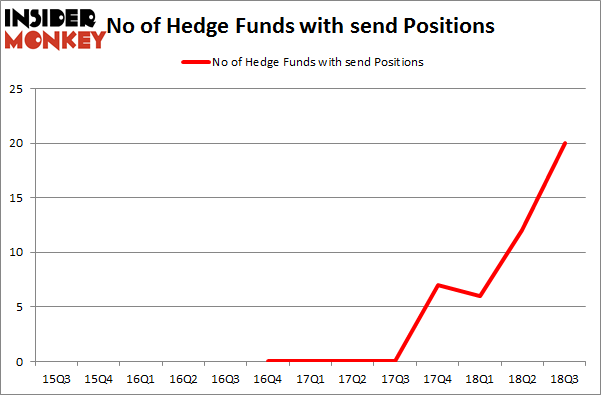 More specifically, Jericho Capital Asset Management was the largest shareholder of SendGrid, Inc. (NYSE:SEND), with a stake worth $31.7 million reported as of the end of September. Trailing Jericho Capital Asset Management was Shannon River Fund Management, which amassed a stake valued at $23.8 million. Renaissance Technologies, Driehaus Capital, and Garelick Capital Partners were also very fond of the stock, giving the stock large weights in their portfolios.

Now, key hedge funds were leading the bulls’ herd. Jericho Capital Asset Management, managed by Josh Resnick, assembled the most outsized position in SendGrid, Inc. (NYSE:SEND). Jericho Capital Asset Management had $31.7 million invested in the company at the end of the quarter. Jim Simons’s Renaissance Technologies also made a $23 million investment in the stock during the quarter. The other funds with new positions in the stock are Richard Driehaus’s Driehaus Capital, David Costen Haley’s HBK Investments, and John Overdeck and David Siegel’s Two Sigma Advisors.

As you can see these stocks had an average of 14.25 hedge funds with bullish positions and the average amount invested in these stocks was $156 million. That figure was $157 million in SEND’s case. Actuant Corporation (NYSE:ATU) is the most popular stock in this table. On the other hand Calavo Growers, Inc. (NASDAQ:CVGW) is the least popular one with only 12 bullish hedge fund positions. Compared to these stocks SendGrid, Inc. (NYSE:SEND) is more popular among hedge funds. Considering that hedge funds are fond of this stock in relation to its market cap peers, it may be a good idea to analyze it in detail and potentially include it in your portfolio.

Should You Buy Murphy USA Inc. (MUSA)?
Monthly Newsletter Strategy
Download a free copy of our newsletter and see the details inside!
Hedge Fund Resource Center
Related News
11 Countries With The Worst Modern Music In The World The Top 5 Robo Advisor Apps of 2018 Five Reasons You Need a Day-Trading Mentor
Billionaire Hedge Funds