Sealed Air Corporation (NYSE:SEE) was in 30 hedge funds’ portfolios at the end of September. SEE investors should pay attention to an increase in activity from the world’s largest hedge funds in recent months. There were 25 hedge funds in our database with SEE holdings at the end of the previous quarter. Our calculations also showed that SEE isn’t among the 30 most popular stocks among hedge funds.

What have hedge funds been doing with Sealed Air Corporation (NYSE:SEE)? 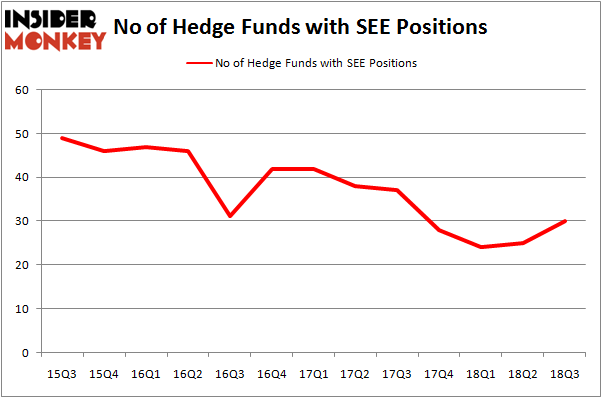 Among these funds, Kensico Capital held the most valuable stake in Sealed Air Corporation (NYSE:SEE), which was worth $168.2 million at the end of the third quarter. On the second spot was Impax Asset Management which amassed $126 million worth of shares. Moreover, Samlyn Capital, D E Shaw, and Marshall Wace LLP were also bullish on Sealed Air Corporation (NYSE:SEE), allocating a large percentage of their portfolios to this stock.

Let’s now take a look at hedge fund activity in other stocks – not necessarily in the same industry as Sealed Air Corporation (NYSE:SEE) but similarly valued. These stocks are BOK Financial Corporation (NASDAQ:BOKF), EQM Midstream Partners, LP (NYSE:EQM), Signature Bank (NASDAQ:SBNY), and The Toro Company (NYSE:TTC). All of these stocks’ market caps are similar to SEE’s market cap.

As you can see these stocks had an average of 17.5 hedge funds with bullish positions and the average amount invested in these stocks was $353 million. That figure was $715 million in SEE’s case. Signature Bank (NASDAQ:SBNY) is the most popular stock in this table. On the other hand EQM Midstream Partners, LP (NYSE:EQM) is the least popular one with only 8 bullish hedge fund positions. Compared to these stocks Sealed Air Corporation (NYSE:SEE) is more popular among hedge funds. Considering that hedge funds are fond of this stock in relation to its market cap peers, it may be a good idea to analyze it in detail and potentially include it in your portfolio.