After several tireless days we have finished crunching the numbers from the more than 700 13F filings issued by the elite hedge funds and other investment firms that we track at Insider Monkey, which disclosed those firms’ equity portfolios as of September 30. The results of that effort will be put on display in this article, as we share valuable insight into the smart money sentiment towards ResMed Inc. (NYSE:RMD).

ResMed Inc. (NYSE:RMD) was in 24 hedge funds’ portfolios at the end of the third quarter of 2018. RMD investors should be aware of an increase in support from the world’s most elite money managers of late. There were 19 hedge funds in our database with RMD holdings at the end of the previous quarter. Our calculations also showed that RMD isn’t among the 30 most popular stocks among hedge funds.

How have hedgies been trading ResMed Inc. (NYSE:RMD)? 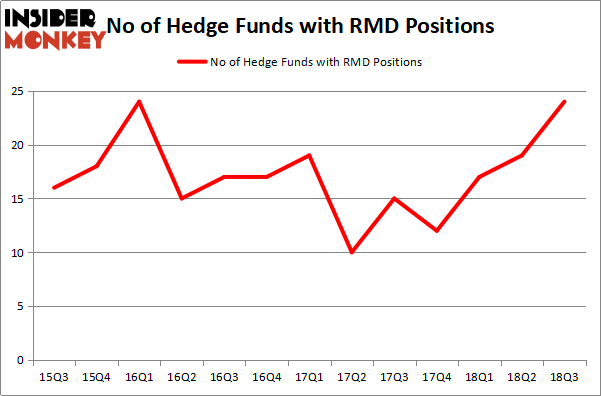 More specifically, Arrowstreet Capital was the largest shareholder of ResMed Inc. (NYSE:RMD), with a stake worth $112.5 million reported as of the end of September. Trailing Arrowstreet Capital was Renaissance Technologies, which amassed a stake valued at $86.3 million. D E Shaw, Marshall Wace LLP, and AQR Capital Management were also very fond of the stock, giving the stock large weights in their portfolios.

Consequently, some big names were leading the bulls’ herd. PDT Partners, managed by Peter Muller, established the most valuable position in ResMed Inc. (NYSE:RMD). PDT Partners had $9.2 million invested in the company at the end of the quarter. Matthew Tewksbury’s Stevens Capital Management also made a $8.3 million investment in the stock during the quarter. The following funds were also among the new RMD investors: Brandon Haley’s Holocene Advisors, Glenn Russell Dubin’s Highbridge Capital Management, and Steve Cohen’s Point72 Asset Management.

Let’s check out hedge fund activity in other stocks – not necessarily in the same industry as ResMed Inc. (NYSE:RMD) but similarly valued. We will take a look at Telefonica Brasil SA (NYSE:VIV), Essex Property Trust Inc (NYSE:ESS), CNH Industrial NV (NYSE:CNHI), and Weibo Corp (NASDAQ:WB). All of these stocks’ market caps are similar to RMD’s market cap.

As you can see these stocks had an average of 16.5 hedge funds with bullish positions and the average amount invested in these stocks was $281 million. That figure was $489 million in RMD’s case. Weibo Corp (NASDAQ:WB) is the most popular stock in this table. On the other hand Telefonica Brasil SA (NYSE:VIV) is the least popular one with only 13 bullish hedge fund positions. Compared to these stocks ResMed Inc. (NYSE:RMD) is more popular among hedge funds. Considering that hedge funds are fond of this stock in relation to its market cap peers, it may be a good idea to analyze it in detail and potentially include it in your portfolio.