RealPage, Inc. (NASDAQ:RP) was in 27 hedge funds’ portfolios at the end of the third quarter of 2018. RP investors should be aware of a decrease in activity from the world’s largest hedge funds recently. There were 28 hedge funds in our database with RP holdings at the end of the previous quarter. Our calculations also showed that RP isn’t among the 30 most popular stocks among hedge funds.

Heading into the fourth quarter of 2018, a total of 27 of the hedge funds tracked by Insider Monkey held long positions in this stock, a change of -4% from the previous quarter. By comparison, 20 hedge funds held shares or bullish call options in RP heading into this year. With hedgies’ sentiment swirling, there exists a select group of noteworthy hedge fund managers who were upping their stakes significantly (or already accumulated large positions). 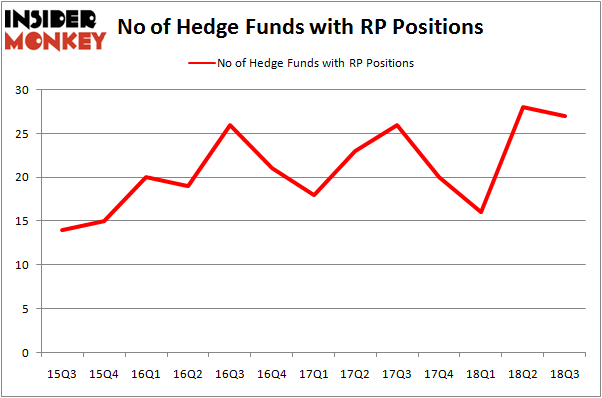 Because RealPage, Inc. (NASDAQ:RP) has experienced declining sentiment from hedge fund managers, it’s safe to say that there were a few fund managers who sold off their positions entirely in the third quarter. At the top of the heap, Stuart J. Zimmer’s Zimmer Partners cut the biggest investment of the 700 funds tracked by Insider Monkey, totaling an estimated $4.7 million in stock, and Bart Baum’s Ionic Capital Management was right behind this move, as the fund dumped about $3.6 million worth. These bearish behaviors are interesting, as aggregate hedge fund interest fell by 1 funds in the third quarter.

As you can see these stocks had an average of 23.25 hedge funds with bullish positions and the average amount invested in these stocks was $432 million. That figure was $424 million in RP’s case. Etsy Inc (NASDAQ:ETSY) is the most popular stock in this table. On the other hand Grupo Aeroportuario del Sureste, S. A. B. de C. V. (NYSE:ASR) is the least popular one with only 3 bullish hedge fund positions. RealPage, Inc. (NASDAQ:RP) is not the most popular stock in this group but hedge fund interest is still above average. This is a slightly positive signal but we’d rather spend our time researching stocks that hedge funds are piling on. In this regard ETSY might be a better candidate to consider a long position.