How do you pick the next stock to invest in? One way would be to spend hours of research browsing through thousands of publicly traded companies. However, an easier way is to look at the stocks that smart money investors are collectively bullish on. Hedge funds and other institutional investors usually invest large amounts of capital and have to conduct due diligence while choosing their next pick. They don’t always get it right, but, on average, their stock picks historically generated strong returns after adjusting for known risk factors. With this in mind, let’s take a look at the recent hedge fund activity surrounding Pinnacle West Capital Corporation (NYSE:PNW).

Pinnacle West Capital Corporation (NYSE:PNW) was in 20 hedge funds’ portfolios at the end of the third quarter of 2018. PNW shareholders have witnessed an increase in hedge fund sentiment lately. There were 17 hedge funds in our database with PNW positions at the end of the previous quarter. Our calculations also showed that pnw isn’t among the 30 most popular stocks among hedge funds.

If you’d ask most stock holders, hedge funds are seen as unimportant, outdated financial tools of the past. While there are greater than 8,000 funds in operation at the moment, Our researchers choose to focus on the leaders of this group, about 700 funds. These money managers control most of the smart money’s total capital, and by keeping track of their unrivaled equity investments, Insider Monkey has deciphered numerous investment strategies that have historically exceeded Mr. Market. Insider Monkey’s flagship hedge fund strategy beat the S&P 500 index by 6 percentage points per year since its inception in May 2014 through early November 2018. We were able to generate large returns even by identifying short candidates. Our portfolio of short stocks lost 24% since February 2017 (through December 3rd) even though the market was up nearly 23% during the same period. We just shared a list of 11 short targets in our latest quarterly update.

What does the smart money think about Pinnacle West Capital Corporation (NYSE:PNW)?

At the end of the third quarter, a total of 20 of the hedge funds tracked by Insider Monkey were bullish on this stock, a change of 18% from the previous quarter. Below, you can check out the change in hedge fund sentiment towards PNW over the last 13 quarters. With the smart money’s positions undergoing their usual ebb and flow, there exists a few key hedge fund managers who were boosting their stakes substantially (or already accumulated large positions). 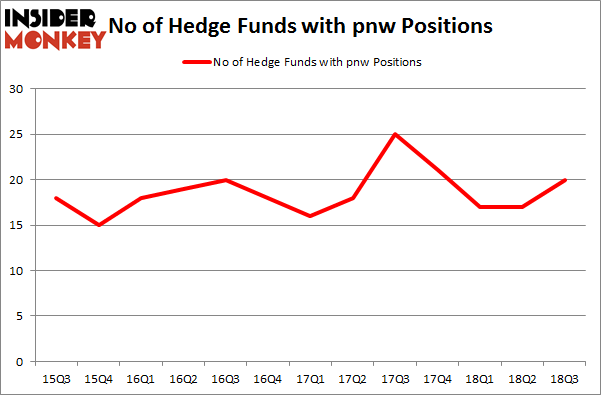 The largest stake in Pinnacle West Capital Corporation (NYSE:PNW) was held by Renaissance Technologies, which reported holding $196.7 million worth of stock at the end of September. It was followed by AQR Capital Management with a $114.5 million position. Other investors bullish on the company included Millennium Management, Two Sigma Advisors, and Citadel Investment Group.

As one would reasonably expect, key hedge funds have jumped into Pinnacle West Capital Corporation (NYSE:PNW) headfirst. Element Capital Management, managed by Jeffrey Talpins, created the biggest position in Pinnacle West Capital Corporation (NYSE:PNW). Element Capital Management had $2.5 million invested in the company at the end of the quarter. Paul Tudor Jones’s Tudor Investment Corp also made a $1.9 million investment in the stock during the quarter. The other funds with new positions in the stock are Roger Ibbotson’s Zebra Capital Management, Paul Marshall and Ian Wace’s Marshall Wace LLP, and David Andre and Astro Teller’s Cerebellum Capital.

As you can see these stocks had an average of 26.5 hedge funds with bullish positions and the average amount invested in these stocks was $864 million. That figure was $631 million in PNW’s case. Carvana Co. (NYSE:CVNA) is the most popular stock in this table. On the other hand Teledyne Technologies Incorporated (NYSE:TDY) is the least popular one with only 19 bullish hedge fund positions. Pinnacle West Capital Corporation (NYSE:PNW) is not the least popular stock in this group but hedge fund interest is still below average. This is a slightly negative signal and we’d rather spend our time researching stocks that hedge funds are piling on. In this regard CVNA might be a better candidate to consider a long position.