Looking for stocks with high upside potential? Just follow the big players within the hedge fund industry. Why should you do so? Let’s take a brief look at what statistics have to say about hedge funds’ stock picking abilities to illustrate. The Standard and Poor’s 500 Index returned approximately 5.7% in the 12 months ending October 26 (including dividend payments). Conversely, hedge funds’ 30 preferred S&P 500 stocks (as of June 2014) generated a return of 15.1% during the same 12-month period, with 53% of these stock picks outperforming the broader market benchmark. Coincidence? It might happen to be so, but it is unlikely. Our research covering the last 18 years indicates that hedge funds’ stock picks generate superior risk-adjusted returns. That’s why we believe it is wise to check hedge fund activity before you invest your time or your savings on a stock like NMI Holdings Inc (NASDAQ:NMIH).

NMI Holdings Inc (NASDAQ:NMIH) was in 12 hedge funds’ portfolios at the end of the third quarter of 2018. NMIH shareholders have witnessed a decrease in enthusiasm from smart money lately. There were 15 hedge funds in our database with NMIH holdings at the end of the previous quarter. Our calculations also showed that nmih isn’t among the 30 most popular stocks among hedge funds.

According to most investors, hedge funds are assumed to be slow, old financial tools of the past. While there are greater than 8,000 funds with their doors open at present, Our researchers choose to focus on the crème de la crème of this club, around 700 funds. These investment experts orchestrate the lion’s share of the hedge fund industry’s total asset base, and by observing their highest performing picks, Insider Monkey has brought to light a few investment strategies that have historically beaten the broader indices. Insider Monkey’s flagship hedge fund strategy outstripped the S&P 500 index by 6 percentage points per annum since its inception in May 2014 through early November 2018. We were able to generate large returns even by identifying short candidates. Our portfolio of short stocks lost 24% since February 2017 (through December 3rd) even though the market was up nearly 23% during the same period. We just shared a list of 11 short targets in our latest quarterly update.

Heading into the fourth quarter of 2018, a total of 12 of the hedge funds tracked by Insider Monkey were bullish on this stock, a change of -20% from the previous quarter. On the other hand, there were a total of 16 hedge funds with a bullish position in NMIH at the beginning of this year. With hedge funds’ capital changing hands, there exists an “upper tier” of noteworthy hedge fund managers who were increasing their stakes considerably (or already accumulated large positions). 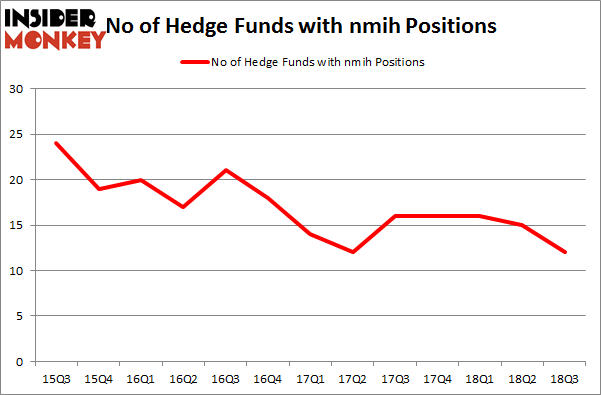 Among these funds, Oaktree Capital Management held the most valuable stake in NMI Holdings Inc (NASDAQ:NMIH), which was worth $128.7 million at the end of the third quarter. On the second spot was Renaissance Technologies which amassed $42.9 million worth of shares. Moreover, Driehaus Capital, Royce & Associates, and Millennium Management were also bullish on NMI Holdings Inc (NASDAQ:NMIH), allocating a large percentage of their portfolios to this stock.

Seeing as NMI Holdings Inc (NASDAQ:NMIH) has experienced declining sentiment from hedge fund managers, it’s safe to say that there lies a certain “tier” of hedgies that slashed their entire stakes last quarter. At the top of the heap, Shawn Bergerson and Martin Kalish’s Waterstone Capital Management dumped the biggest position of the 700 funds followed by Insider Monkey, totaling close to $1.9 million in stock, and Mike Vranos’s Ellington was right behind this move, as the fund dumped about $1.1 million worth. These moves are important to note, as aggregate hedge fund interest was cut by 3 funds last quarter.

As you can see these stocks had an average of 12.75 hedge funds with bullish positions and the average amount invested in these stocks was $168 million. That figure was $197 million in NMIH’s case. Audentes Therapeutics, Inc. (NASDAQ:BOLD) is the most popular stock in this table. On the other hand PIMCO Corporate&Income Opportunity Fund (NYSE:PTY) is the least popular one with only 2 bullish hedge fund positions. NMI Holdings Inc (NASDAQ:NMIH) is not the least popular stock in this group but hedge fund interest is still below average. This is a slightly negative signal and we’d rather spend our time researching stocks that hedge funds are piling on. In this regard BOLD might be a better candidate to consider a long position.