Investing in small cap stocks has historically been a way to outperform the market, as small cap companies typically grow faster on average than the blue chips. That outperformance comes with a price, however, as there are occasional periods of higher volatility. The one and a half month time period since the end of the third quarter is one of those periods, as the Russell 2000 ETF (IWM) has underperformed the larger S&P 500 ETF (SPY) by about 4 percentage points. Given that the funds we track tend to have a disproportionate amount of their portfolios in smaller cap stocks, they have seen some volatility in their portfolios too. Actually their moves are potentially one of the factors that contributed to this volatility. In this article, we use our extensive database of hedge fund holdings to find out what the smart money thinks of New Residential Investment Corp (NYSE:NRZ).

New Residential Investment Corp (NYSE:NRZ) investors should pay attention to a decrease in activity from the world’s largest hedge funds in recent months. Our calculations also showed that NRZ isn’t among the 30 most popular stocks among hedge funds.

What have hedge funds been doing with New Residential Investment Corp (NYSE:NRZ)?

At Q3’s end, a total of 16 of the hedge funds tracked by Insider Monkey were long this stock, a change of -16% from the second quarter of 2018. By comparison, 24 hedge funds held shares or bullish call options in NRZ heading into this year. With hedge funds’ positions undergoing their usual ebb and flow, there exists a select group of notable hedge fund managers who were boosting their holdings considerably (or already accumulated large positions). 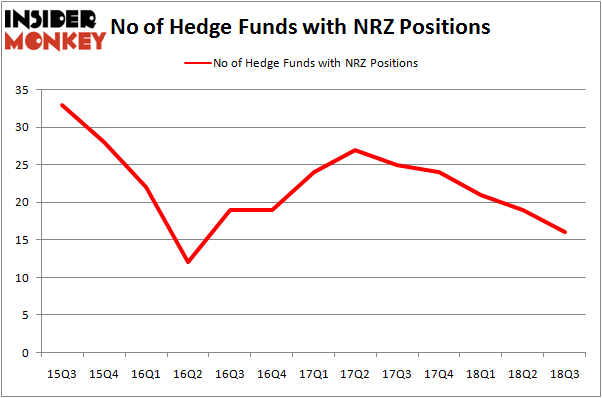 According to publicly available hedge fund and institutional investor holdings data compiled by Insider Monkey, Kingstown Capital Management, managed by Michael Blitzer, holds the most valuable position in New Residential Investment Corp (NYSE:NRZ). Kingstown Capital Management has a $53.5 million position in the stock, comprising 7.1% of its 13F portfolio. Sitting at the No. 2 spot is Jim Simons of Renaissance Technologies, with a $33.9 million position; less than 0.1%% of its 13F portfolio is allocated to the stock. Some other hedge funds and institutional investors that hold long positions contain Israel Englander’s Millennium Management, and Andy Redleaf’s Whitebox Advisors.

Because New Residential Investment Corp (NYSE:NRZ) has faced falling interest from the smart money, it’s easy to see that there is a sect of money managers who were dropping their full holdings by the end of the third quarter. It’s worth mentioning that Paul Marshall and Ian Wace’s Marshall Wace LLP dropped the largest investment of the “upper crust” of funds watched by Insider Monkey, comprising about $7 million in stock. Eric Edidin and Josh Lobel’s fund, Archer Capital Management, also said goodbye to its stock, about $4.4 million worth. These moves are intriguing to say the least, as aggregate hedge fund interest was cut by 3 funds by the end of the third quarter.

As you can see these stocks had an average of 20.25 hedge funds with bullish positions and the average amount invested in these stocks was $760 million. That figure was $115 million in NRZ’s case. Curtiss-Wright Corp. (NYSE:CW) is the most popular stock in this table. On the other hand Ollie’s Bargain Outlet Holdings Inc (NASDAQ:OLLI) is the least popular one with only 17 bullish hedge fund positions. Compared to these stocks New Residential Investment Corp (NYSE:NRZ) is even less popular than OLLI. Considering that hedge funds aren’t fond of this stock in relation to other companies analyzed in this article, it may be a good idea to analyze it in detail and understand why the smart money isn’t behind this stock. This isn’t necessarily bad news. Although it is possible that hedge funds may think the stock is overpriced and view the stock as a short candidate, they may not be very familiar with the bullish thesis. In either case more research is warranted.