Is Mobileiron Inc (NASDAQ:MOBL) a bargain? The smart money is definitely becoming hopeful. The number of long hedge fund bets that are revealed through the 13F filings moved up by 2 recently. MOBL was in 10 hedge funds’ portfolios at the end of the third quarter of 2016. There were 8 hedge funds in our database with MOBL positions at the end of the previous quarter. The level and the change in hedge fund popularity aren’t the only variables you need to analyze to decipher hedge funds’ perspectives. A stock may witness a boost in popularity but it may still be less popular than similarly priced stocks. That’s why at the end of this article we will examine companies such as Datalink Corporation (NASDAQ:DTLK), Tandem Diabetes Care Inc (NASDAQ:TNDM), and Enzo Biochem, Inc. (NYSE:ENZ) to gather more data points.

Keeping this in mind, we’re going to take a peek at the new action encompassing Mobileiron Inc (NASDAQ:MOBL).

Heading into the fourth quarter of 2016, a total of 10 of the hedge funds tracked by Insider Monkey were bullish on this stock, a change of 25% from one quarter earlier. Below, you can check out the change in hedge fund sentiment towards MOBL over the last 5 quarters. With the smart money’s capital changing hands, there exists an “upper tier” of notable hedge fund managers who were increasing their holdings substantially (or already accumulated large positions). 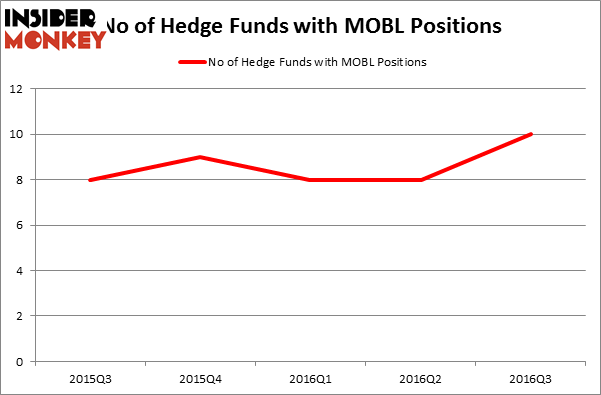 According to publicly available hedge fund and institutional investor holdings data compiled by Insider Monkey, Lei Zhang of Hillhouse Capital Management holds the most valuable position in Mobileiron Inc (NASDAQ:MOBL). Hillhouse Capital Management has a $2.8 million position in the stock. Coming in second is Renaissance Technologies, one of the largest hedge funds in the world, holding a $2.2 million position. Some other hedge funds and institutional investors that hold long positions contain Leon Shaulov’s Maplelane Capital, Jack Ripsteen’s Potrero Capital Research and D E Shaw. We should note that two of these hedge funds (Maplelane Capital and Potrero Capital Research) are among our list of the 100 best performing hedge funds which is based on the performance of their 13F long positions in non-microcap stocks.