Hedge funds are not perfect. They have their bad picks just like everyone else. Facebook, a stock hedge funds have loved, lost a third of its value since the end of July. Although hedge funds are not perfect, their consensus picks do deliver solid returns, however. Our data show the top 30 S&P 500 stocks among hedge funds at the end of September 2018 yielded an average return of 6.7% year-to-date, vs. a gain of 2.6% for the S&P 500 Index. Because hedge funds have a lot of resources and their consensus picks do well, we pay attention to what they think. In this article, we analyze what the elite funds think of Medley Capital Corp (NYSE:MCC).

Medley Capital Corp (NYSE:MCC) shares haven’t seen a lot of action during the third quarter. Overall, hedge fund sentiment was unchanged. The stock was in 6 hedge funds’ portfolios at the end of the third quarter of 2018. At the end of this article we will also compare MCC to other stocks including Consolidated Water Co. Ltd. (NASDAQ:CWCO), FS Bancorp, Inc. (NASDAQ:FSBW), and MDC Partners Inc. (NASDAQ:MDCA) to get a better sense of its popularity.

In the eyes of most investors, hedge funds are perceived as slow, outdated financial vehicles of years past. While there are more than 8,000 funds in operation at present, Our researchers look at the leaders of this group, approximately 700 funds. These investment experts oversee the majority of the smart money’s total capital, and by observing their best stock picks, Insider Monkey has unsheathed various investment strategies that have historically defeated the S&P 500 index. Insider Monkey’s flagship hedge fund strategy beat the S&P 500 index by 6 percentage points per year since its inception in May 2014 through early November 2018. We were able to generate large returns even by identifying short candidates. Our portfolio of short stocks lost 24% since February 2017 (through December 3rd) even though the market was up nearly 23% during the same period. We just shared a list of 11 short targets in our latest quarterly update. 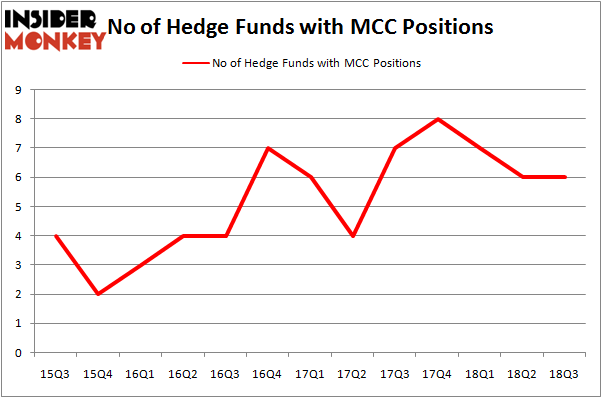 More specifically, Moab Capital Partners was the largest shareholder of Medley Capital Corp (NYSE:MCC), with a stake worth $5.9 million reported as of the end of September. Trailing Moab Capital Partners was FrontFour Capital Group, which amassed a stake valued at $5.8 million. Roumell Asset Management, Fondren Management, and Two Sigma Advisors were also very fond of the stock, giving the stock large weights in their portfolios.

Due to the fact that Medley Capital Corp (NYSE:MCC) has experienced a decline in interest from the aggregate hedge fund industry, it’s safe to say that there were a few hedge funds who were dropping their positions entirely in the third quarter. Interestingly, James Dondero’s Highland Capital Management cut the largest position of the 700 funds monitored by Insider Monkey, valued at an estimated $0.3 million in stock. Israel Englander’s fund, Millennium Management, also said goodbye to its stock, about $0.3 million worth. These transactions are important to note, as total hedge fund interest stayed the same (this is a bearish signal in our experience).

As you can see these stocks had an average of 6.5 hedge funds with bullish positions and the average amount invested in these stocks was $16 million. That figure was $19 million in MCC’s case. MDC Partners Inc. (NASDAQ:MDCA) is the most popular stock in this table. On the other hand Celsius Holdings, Inc. (NASDAQ:CELH) is the least popular one with only 1 bullish hedge fund positions. Medley Capital Corp (NYSE:MCC) is not the least popular stock in this group but hedge fund interest is still below average. This is a slightly negative signal and we’d rather spend our time researching stocks that hedge funds are piling on. In this regard MDCA might be a better candidate to consider a long position.