Like everyone else, elite investors make mistakes. Some of their top consensus picks, such as Amazon, Facebook and Alibaba, have not done well in October due to various reasons. Nevertheless, the data show elite investors’ consensus picks have done well on average over the long-term. The top 30 S&P 500 stocks among hedge funds at the end of September 2018 returned an average of 6.7% through November 15th whereas the S&P 500 Index ETF gained only 2.6% during the same period. Because their consensus picks have done well, we pay attention to what elite funds think before doing extensive research on a stock. In this article, we take a closer look at Loral Space & Communications Inc. (NASDAQ:LORL) from the perspective of those elite funds.

Loral Space & Communications Inc. (NASDAQ:LORL) was in 22 hedge funds’ portfolios at the end of the third quarter of 2018. LORL investors should pay attention to a decrease in hedge fund interest recently. There were 25 hedge funds in our database with LORL holdings at the end of the previous quarter. Our calculations also showed that LORL isn’t among the 30 most popular stocks among hedge funds. 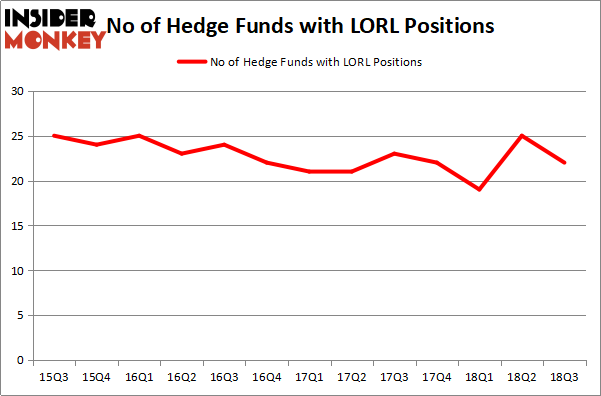 Of the funds tracked by Insider Monkey, MHR Fund Management, managed by Mark Rachesky, holds the largest position in Loral Space & Communications Inc. (NASDAQ:LORL). MHR Fund Management has a $387.2 million position in the stock, comprising 20.6% of its 13F portfolio. Sitting at the No. 2 spot is Highland Capital Management, managed by James Dondero, which holds a $91.5 million position; 5% of its 13F portfolio is allocated to the company. Some other members of the smart money that hold long positions comprise Christopher Pucillo’s Solus Alternative Asset Management, Leon Cooperman’s Omega Advisors and Mario Gabelli’s GAMCO Investors.

Judging by the fact that Loral Space & Communications Inc. (NASDAQ:LORL) has witnessed bearish sentiment from hedge fund managers, it’s easy to see that there exists a select few hedge funds that elected to cut their full holdings last quarter. Intriguingly, Zach Schreiber’s Point State Capital cut the largest investment of the 700 funds watched by Insider Monkey, totaling about $4.5 million in stock, and Adam Fox and Samuel Elder’s Altalis Capital Partners was right behind this move, as the fund said goodbye to about $2.7 million worth. These moves are important to note, as aggregate hedge fund interest was cut by 3 funds last quarter.

As you can see these stocks had an average of 14.75 hedge funds with bullish positions and the average amount invested in these stocks was $175 million. That figure was $701 million in LORL’s case. Web.com Group, Inc. (NYSE:WEB) is the most popular stock in this table. On the other hand Noble Midstream Partners LP (NYSE:NBLX) is the least popular one with only 6 bullish hedge fund positions. Loral Space & Communications Inc. (NASDAQ:LORL) is not the most popular stock in this group but hedge fund interest is still above average. This is a slightly positive signal but we’d rather spend our time researching stocks that hedge funds are piling on. In this regard WEB might be a better candidate to consider a long position.