Is Lions Gate Entertainment Corporation (NYSE:LGF-A) a good bet right now? We like to analyze hedge fund sentiment before doing days of in-depth research. We do so because hedge funds and other elite investors have numerous Ivy league graduates, expert network advisers, and supply chain tipsters working or consulting for them. There is not a shortage of news stories covering failed hedge fund investments and it is a fact that hedge funds’ picks don’t beat the market 100% of the time, but their consensus picks have historically done very well and have outperformed the market after adjusting for risk.

Hedge fund interest in Lions Gate Entertainment Corporation (NYSE:LGF-A) shares was flat at the end of last quarter. This is usually a negative indicator. The level and the change in hedge fund popularity aren’t the only variables you need to analyze to decipher hedge funds’ perspectives. A stock may witness a boost in popularity but it may still be less popular than similarly priced stocks. That’s why at the end of this article we will examine companies such as IDACORP Inc (NYSE:IDA), Woodward Inc (NASDAQ:WWD), and MSC Industrial Direct Co Inc (NYSE:MSM) to gather more data points.

What have hedge funds been doing with Lions Gate Entertainment Corporation (NYSE:LGF-A)? 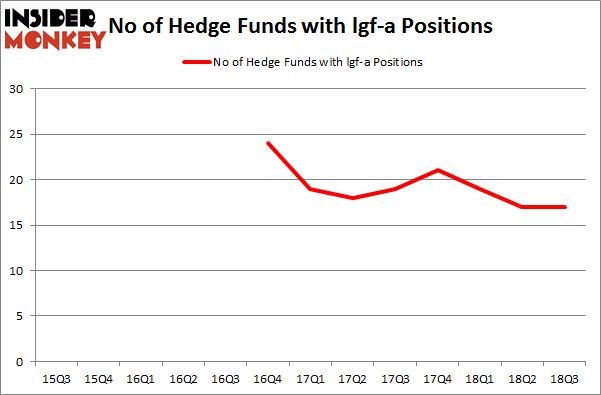 Among these funds, MHR Fund Management held the most valuable stake in Lions Gate Entertainment Corporation (NYSE:LGF-A), which was worth $368.4 million at the end of the third quarter. On the second spot was Soros Fund Management which amassed $31.9 million worth of shares. Moreover, Marshall Wace LLP, AQR Capital Management, and Nokota Management were also bullish on Lions Gate Entertainment Corporation (NYSE:LGF-A), allocating a large percentage of their portfolios to this stock.

Because Lions Gate Entertainment Corporation (NYSE:LGF-A) has witnessed bearish sentiment from hedge fund managers, it’s easy to see that there lies a certain “tier” of fund managers that elected to cut their full holdings by the end of the third quarter. At the top of the heap, Steve Cohen’s Point72 Asset Management said goodbye to the biggest position of the “upper crust” of funds tracked by Insider Monkey, valued at close to $7.4 million in stock. Nick Niell’s fund, Arrowgrass Capital Partners, also cut its stock, about $2.5 million worth. These moves are important to note, as aggregate hedge fund interest stayed the same (this is a bearish signal in our experience).

As you can see these stocks had an average of 16 hedge funds with bullish positions and the average amount invested in these stocks was $222 million. That figure was $476 million in LGF-A’s case. Nuance Communications Inc. (NASDAQ:NUAN) is the most popular stock in this table. On the other hand IDACORP Inc (NYSE:IDA) is the least popular one with only 11 bullish hedge fund positions. Lions Gate Entertainment Corporation (NYSE:LGF-A) is not the most popular stock in this group but hedge fund interest is still above average. This is a slightly positive signal but we’d rather spend our time researching stocks that hedge funds are piling on. In this regard NUAN might be a better candidate to consider a long position.