We can judge whether Koninklijke Philips NV (NYSE:PHG) is a good investment right now by following the lead of some of the best investors in the world and piggybacking their ideas. There’s no better way to get these firms’ immense resources and analytical capabilities working for us than to follow their lead into their best ideas. While not all of these picks will be winners, research shows that these picks historically outperformed the market when we factor in known risk factors.

Koninklijke Philips NV (NYSE:PHG) investors should pay attention to an increase in hedge fund sentiment of late. Our calculations also showed that PHG isn’t among the 30 most popular stocks among hedge funds.

To the average investor there are a large number of methods shareholders put to use to evaluate stocks. Some of the best methods are hedge fund and insider trading sentiment. We have shown that, historically, those who follow the best picks of the top fund managers can outpace the broader indices by a healthy amount (see the details here).

What have hedge funds been doing with Koninklijke Philips NV (NYSE:PHG)? 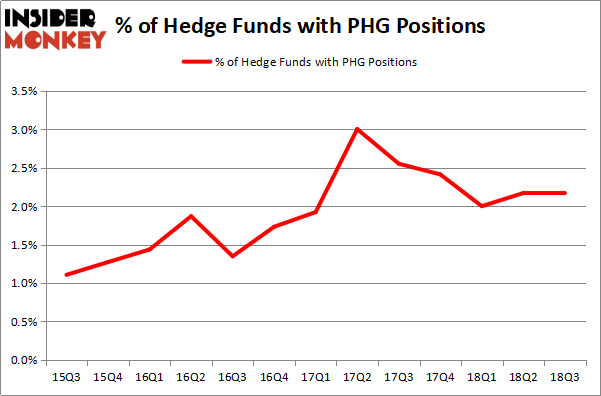 Of the funds tracked by Insider Monkey, Peter Rathjens, Bruce Clarke and John Campbell’s Arrowstreet Capital has the biggest position in Koninklijke Philips NV (NYSE:PHG), worth close to $248.8 million, comprising 0.6% of its total 13F portfolio. On Arrowstreet Capital’s heels is Robert Pohly of Samlyn Capital, with a $52.4 million position; the fund has 1.2% of its 13F portfolio invested in the stock. Some other professional money managers with similar optimism comprise Robert Pitts’s Steadfast Capital Management, Christopher Lord’s Criterion Capital and Martin D. Sass’s MD Sass.

As aggregate interest increased, some big names were leading the bulls’ herd. Hudson Bay Capital Management, managed by Sander Gerber, initiated the biggest position in Koninklijke Philips NV (NYSE:PHG). Hudson Bay Capital Management had $2.3 million invested in the company at the end of the quarter. Dmitry Balyasny’s Balyasny Asset Management also made a $1.1 million investment in the stock during the quarter. The only other fund with a new position in the stock is Murray Stahl’s Horizon Asset Management.

As you can see these stocks had an average of 18.25 hedge funds with bullish positions and the average amount invested in these stocks was $846 million. That figure was $456 million in PHG’s case. Prudential Financial Inc (NYSE:PRU) is the most popular stock in this table. On the other hand Orange S.A. (ORAN) is the least popular one with only 1 bullish hedge fund positions. Koninklijke Philips NV (NYSE:PHG) is not the least popular stock in this group but hedge fund interest is still below average. This is a slightly negative signal and we’d rather spend our time researching stocks that hedge funds are piling on. In this regard PRU might be a better candidate to consider a long position.