Is Kirby Corporation (NYSE:KEX) the right pick for your portfolio? Hedge funds are selling. The number of long hedge fund positions went down by 2 recently. Our calculations also showed that KEX isn’t among the 30 most popular stocks among hedge funds. 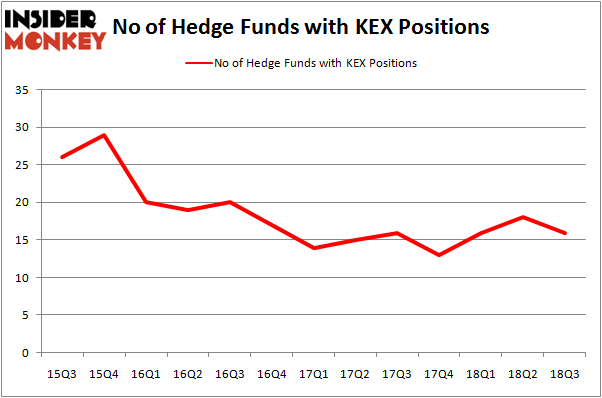 More specifically, Diamond Hill Capital was the largest shareholder of Kirby Corporation (NYSE:KEX), with a stake worth $175.4 million reported as of the end of September. Trailing Diamond Hill Capital was Royce & Associates, which amassed a stake valued at $111.3 million. Polar Capital, D E Shaw, and Scopus Asset Management were also very fond of the stock, giving the stock large weights in their portfolios.

Seeing as Kirby Corporation (NYSE:KEX) has experienced a decline in interest from hedge fund managers, we can see that there lies a certain “tier” of fund managers that elected to cut their entire stakes last quarter. Intriguingly, Clint Murray’s Lodge Hill Capital cut the biggest position of all the hedgies monitored by Insider Monkey, worth about $26.1 million in stock. Till Bechtolsheimer’s fund, Arosa Capital Management, also sold off its stock, about $19.2 million worth. These transactions are interesting, as total hedge fund interest dropped by 2 funds last quarter.

As you can see these stocks had an average of 12 hedge funds with bullish positions and the average amount invested in these stocks was $257 million. That figure was $438 million in KEX’s case. GW Pharmaceuticals plc (NASDAQ:GWPH) is the most popular stock in this table. On the other hand Algonquin Power & Utilities Corp. (NYSE:AQN) is the least popular one with only 6 bullish hedge fund positions. Kirby Corporation (NYSE:KEX) is not the most popular stock in this group but hedge fund interest is still above average. This is a slightly positive signal but we’d rather spend our time researching stocks that hedge funds are piling on. In this regard GWPH might be a better candidate to consider a long position.