Huntington Bancshares Incorporated (NASDAQ:HBAN) shares haven’t seen a lot of action during the third quarter. Overall, hedge fund sentiment was unchanged. The stock was in 26 hedge funds’ portfolios at the end of September. At the end of this article we will also compare HBAN to other stocks including National Oilwell Varco, Inc. (NYSE:NOV), ResMed Inc. (NYSE:RMD), and Telefonica Brasil SA (NYSE:VIV) to get a better sense of its popularity. 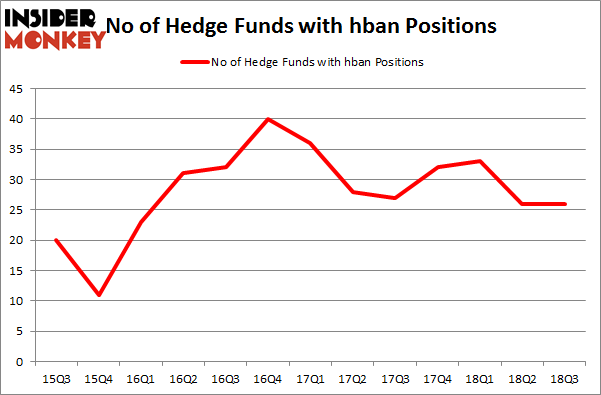 Judging by the fact that Huntington Bancshares Incorporated (NASDAQ:HBAN) has witnessed a decline in interest from the smart money, logic holds that there is a sect of hedgies that elected to cut their full holdings heading into Q3. It’s worth mentioning that Jim Simons’s Renaissance Technologies sold off the largest investment of all the hedgies followed by Insider Monkey, comprising an estimated $13.7 million in stock. John Overdeck and David Siegel’s fund, Two Sigma Advisors, also sold off its stock, about $9.9 million worth. These moves are interesting, as total hedge fund interest stayed the same (this is a bearish signal in our experience).

As you can see these stocks had an average of 18.75 hedge funds with bullish positions and the average amount invested in these stocks was $405 million. That figure was $261 million in HBAN’s case. ResMed Inc. (NYSE:RMD) is the most popular stock in this table. On the other hand Telefonica Brasil SA (NYSE:VIV) is the least popular one with only 13 bullish hedge fund positions. Compared to these stocks Huntington Bancshares Incorporated (NASDAQ:HBAN) is more popular among hedge funds. Considering that hedge funds are fond of this stock in relation to its market cap peers, it may be a good idea to analyze it in detail and potentially include it in your portfolio.