The latest 13F reporting period has come and gone, and Insider Monkey is again at the forefront when it comes to making use of this gold mine of data. We have processed the filings of the more than 700 world-class investment firms that we track and now have access to the collective wisdom contained in these filings, which are based on their September 30 holdings, data that is available nowhere else. Should you consider HP Inc. (NYSE:HPQ) for your portfolio? We’ll look to this invaluable collective wisdom for the answer.

HP Inc. (NYSE:HPQ) investors should pay attention to an increase in enthusiasm from smart money in recent months. HPQ was in 35 hedge funds’ portfolios at the end of the third quarter of 2018, which is up by one from the previous quarter. Still, that number wasn’t even close for the company to make it as one of the 30 most popular stocks among hedge funds in Q3 of 2018. Nevertheless we’ll continue with our analysis of the stock.

According to First Eagle Fund of America, as reported in its Q3 Commentary – “HP Inc. announced a solid quarter driven by improving volume and pricing in its PC business. The company also increased its guidance for the year as its market share in both PCs and printers continued to improve.”

In today’s marketplace there are a large number of methods stock traders put to use to size up publicly traded companies. A couple of the best methods are hedge fund and insider trading interest. We have shown that, historically, those who follow the top picks of the best hedge fund managers can outclass the market by a significant amount (see the details here). 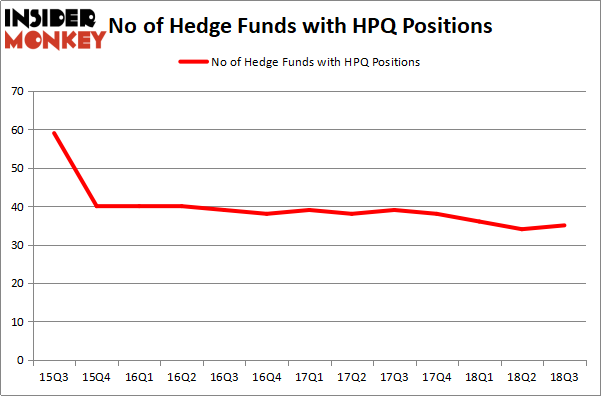 The largest stake in HP Inc. (NYSE:HPQ) was held by Iridian Asset Management, which reported holding $293.5 million worth of stock at the end of September. It was followed by Two Sigma Advisors with a $218.2 million position. Other investors bullish on the company included AQR Capital Management, D E Shaw, and Adage Capital Management.

As you can see these stocks had an average of 34 hedge funds with bullish positions and the average amount invested in these stocks was $2.83 billion. That figure was $1.09 billion in HPQ’s case. Delta Air Lines, Inc. (NYSE:DAL) is the most popular stock in this table. On the other hand China Telecom Corporation Limited (NYSE:CHA) is the least popular one with only 6 bullish hedge fund positions. HP Inc. (NYSE:HPQ) is not the most popular stock in this group but hedge fund interest is still above average. This is a slightly positive signal but we’d rather spend our time researching stocks that hedge funds are piling on. In this regard DAL might be a better candidate to consider a long position.