The government requires hedge funds and wealthy investors with over a certain portfolio size to file a report that shows their positions at the end of every quarter. Even though it isn’t the intention, these filings level the playing field for ordinary investors. The latest round of 13F filings disclosed the funds’ positions on September 30. We at Insider Monkey have made an extensive database of more than 700 of those elite funds and prominent investors’ filings. In this article, we analyze how these elite funds and prominent investors traded Houghton Mifflin Harcourt Co (NASDAQ:HMHC) based on those filings.

Houghton Mifflin Harcourt Co (NASDAQ:HMHC) was in 13 hedge funds’ portfolios at the end of the third quarter of 2018. HMHC investors should pay attention to a decrease in support from the world’s most elite money managers lately. There were 16 hedge funds in our database with HMHC holdings at the end of the previous quarter. Our calculations also showed that hmhc isn’t among the 30 most popular stocks among hedge funds. 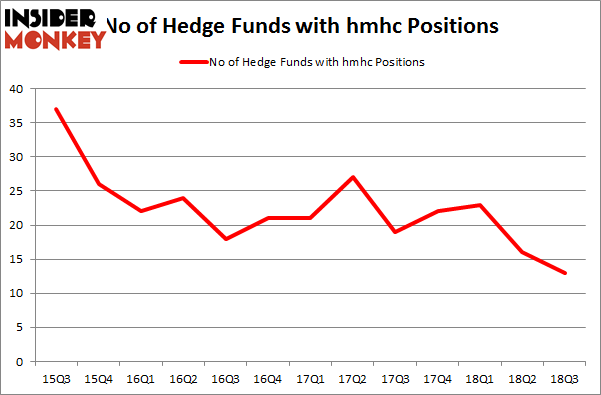 According to Insider Monkey’s hedge fund database, Anchorage Advisors, managed by Kevin Michael Ulrich and Anthony Davis, holds the most valuable position in Houghton Mifflin Harcourt Co (NASDAQ:HMHC). Anchorage Advisors has a $140.6 million position in the stock, comprising 1% of its 13F portfolio. The second largest stake is held by Gilchrist Berg of Water Street Capital, with a $66.4 million position; the fund has 2.2% of its 13F portfolio invested in the stock. Other peers that are bullish contain Chuck Royce’s Royce & Associates, Steve Pei’s Gratia Capital and Ken Griffin’s Citadel Investment Group.

Judging by the fact that Houghton Mifflin Harcourt Co (NASDAQ:HMHC) has experienced declining sentiment from the aggregate hedge fund industry, we can see that there is a sect of fund managers who sold off their full holdings in the third quarter. At the top of the heap, David Costen Haley’s HBK Investments dumped the biggest position of the 700 funds monitored by Insider Monkey, comprising an estimated $1.9 million in stock. Robert Rodriguez and Steven Romick’s fund, First Pacific Advisors LLC, also dumped its stock, about $1.4 million worth. These moves are intriguing to say the least, as total hedge fund interest dropped by 3 funds in the third quarter.

Let’s go over hedge fund activity in other stocks – not necessarily in the same industry as Houghton Mifflin Harcourt Co (NASDAQ:HMHC) but similarly valued. We will take a look at The Providence Service Corporation (NASDAQ:PRSC), United Financial Bancorp, Inc. (NASDAQ:UBNK), Adecoagro SA (NYSE:AGRO), and Comtech Telecommunications Corp. (NASDAQ:CMTL). This group of stocks’ market caps are closest to HMHC’s market cap.

As you can see these stocks had an average of 13.75 hedge funds with bullish positions and the average amount invested in these stocks was $147 million. That figure was $234 million in HMHC’s case. Adecoagro SA (NYSE:AGRO) is the most popular stock in this table. On the other hand The Providence Service Corporation (NASDAQ:PRSC) is the least popular one with only 12 bullish hedge fund positions. Houghton Mifflin Harcourt Co (NASDAQ:HMHC) is not the least popular stock in this group but hedge fund interest is still below average. This is a slightly negative signal and we’d rather spend our time researching stocks that hedge funds are piling on. In this regard AGRO might be a better candidate to consider a long position.