Is Horace Mann Educators Corporation (NYSE:HMN) a buy right now? Investors who are in the know are taking an optimistic view. The number of bullish hedge fund bets improved by 2 in recent months. Our calculations also showed that hmn isn’t among the 30 most popular stocks among hedge funds.

According to most shareholders, hedge funds are assumed to be underperforming, outdated financial tools of yesteryear. While there are more than 8,000 funds trading today, Our researchers hone in on the crème de la crème of this group, about 700 funds. It is estimated that this group of investors oversee the lion’s share of the hedge fund industry’s total capital, and by keeping track of their top picks, Insider Monkey has discovered numerous investment strategies that have historically defeated the broader indices. Insider Monkey’s flagship hedge fund strategy outrun the S&P 500 index by 6 percentage points annually since its inception in May 2014 through early November 2018. We were able to generate large returns even by identifying short candidates. Our portfolio of short stocks lost 24% since February 2017 (through December 3rd) even though the market was up nearly 23% during the same period. We just shared a list of 11 short targets in our latest quarterly update.

What have hedge funds been doing with Horace Mann Educators Corporation (NYSE:HMN)?

At the end of the third quarter, a total of 14 of the hedge funds tracked by Insider Monkey held long positions in this stock, a change of 17% from one quarter earlier. By comparison, 8 hedge funds held shares or bullish call options in HMN heading into this year. With hedgies’ capital changing hands, there exists a select group of noteworthy hedge fund managers who were increasing their stakes substantially (or already accumulated large positions). 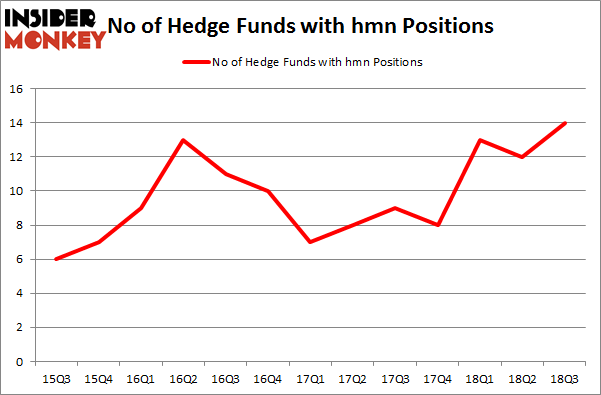 Among these funds, Millennium Management held the most valuable stake in Horace Mann Educators Corporation (NYSE:HMN), which was worth $12.2 million at the end of the third quarter. On the second spot was Ariel Investments which amassed $11.2 million worth of shares. Moreover, GLG Partners, Citadel Investment Group, and AQR Capital Management were also bullish on Horace Mann Educators Corporation (NYSE:HMN), allocating a large percentage of their portfolios to this stock.

With a general bullishness amongst the heavyweights, key hedge funds were leading the bulls’ herd. Laurion Capital Management, managed by Benjamin A. Smith, assembled the largest position in Horace Mann Educators Corporation (NYSE:HMN). Laurion Capital Management had $0.3 million invested in the company at the end of the quarter. Mike Vranos’s Ellington also made a $0.2 million investment in the stock during the quarter. The following funds were also among the new HMN investors: Jim Simons’s Renaissance Technologies and Andrew Feldstein and Stephen Siderow’s Blue Mountain Capital.

As you can see these stocks had an average of 22.75 hedge funds with bullish positions and the average amount invested in these stocks was $264 million. That figure was $36 million in HMN’s case. NxStage Medical, Inc. (NASDAQ:NXTM) is the most popular stock in this table. On the other hand Vicor Corp (NASDAQ:VICR) is the least popular one with only 16 bullish hedge fund positions. Compared to these stocks Horace Mann Educators Corporation (NYSE:HMN) is even less popular than VICR. Considering that hedge funds aren’t fond of this stock in relation to other companies analyzed in this article, it may be a good idea to analyze it in detail and understand why the smart money isn’t behind this stock. This isn’t necessarily bad news. Although it is possible that hedge funds may think the stock is overpriced and view the stock as a short candidate, they may not be very familiar with the bullish thesis. In either case more research is warranted.