After several tireless days we have finished crunching the numbers from the more than 700 13F filings issued by the elite hedge funds and other investment firms that we track at Insider Monkey, which disclosed those firms’ equity portfolios as of September 30. The results of that effort will be put on display in this article, as we share valuable insight into the smart money sentiment towards Honda Motor Co Ltd (NYSE:HMC).

Honda Motor Co Ltd (NYSE:HMC) was in 11 hedge funds’ portfolios at the end of September. HMC has experienced a decrease in enthusiasm from smart money of late. There were 13 hedge funds in our database with HMC positions at the end of the previous quarter. Our calculations also showed that HMC isn’t among the 30 most popular stocks among hedge funds.

How have hedgies been trading Honda Motor Co Ltd (NYSE:HMC)?

At the end of the third quarter, a total of 11 of the hedge funds tracked by Insider Monkey held long positions in this stock, a change of -15% from the previous quarter. On the other hand, there were a total of 7 hedge funds with a bullish position in HMC at the beginning of this year. With hedge funds’ capital changing hands, there exists an “upper tier” of notable hedge fund managers who were adding to their holdings substantially (or already accumulated large positions). 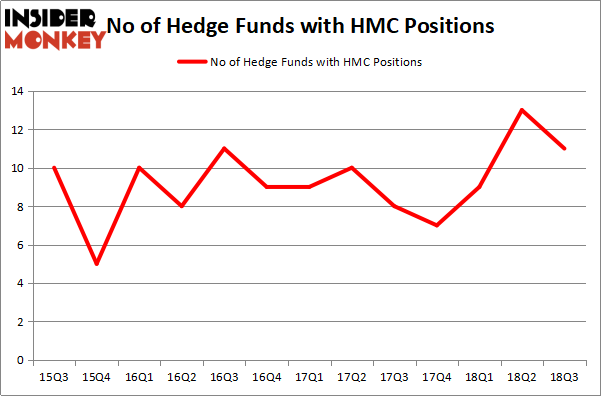 More specifically, Renaissance Technologies was the largest shareholder of Honda Motor Co Ltd (NYSE:HMC), with a stake worth $36.2 million reported as of the end of September. Trailing Renaissance Technologies was Arrowstreet Capital, which amassed a stake valued at $28.4 million. D E Shaw, Orbis Investment Management, and Millennium Management were also very fond of the stock, giving the stock large weights in their portfolios.

Seeing as Honda Motor Co Ltd (NYSE:HMC) has faced falling interest from hedge fund managers, logic holds that there exists a select few money managers that elected to cut their positions entirely by the end of the third quarter. Interestingly, Ben Levine, Andrew Manuel and Stefan Renold’s LMR Partners dumped the biggest position of all the hedgies followed by Insider Monkey, totaling about $0.9 million in stock, and Michael Platt and William Reeves’s BlueCrest Capital Mgmt. was right behind this move, as the fund dropped about $0.5 million worth. These bearish behaviors are interesting, as total hedge fund interest was cut by 2 funds by the end of the third quarter.

As you can see these stocks had an average of 38.5 hedge funds with bullish positions and the average amount invested in these stocks was $3.39 billion. That figure was $118 million in HMC’s case. Micron Technology, Inc. (NASDAQ:MU) is the most popular stock in this table. On the other hand Bank of Montreal (NYSE:BMO) is the least popular one with only 13 bullish hedge fund positions. Compared to these stocks Honda Motor Co Ltd (NYSE:HMC) is even less popular than BMO. Considering that hedge funds aren’t fond of this stock in relation to other companies analyzed in this article, it may be a good idea to analyze it in detail and understand why the smart money isn’t behind this stock. This isn’t necessarily bad news. Although it is possible that hedge funds may think the stock is overpriced and view the stock as a short candidate, they may not be very familiar with the bullish thesis. In either case more research is warranted.