Hilltop Holdings Inc. (NYSE:HTH) has seen an increase in hedge fund sentiment lately. Our calculations also showed that hth isn’t among the 30 most popular stocks among hedge funds.

In today’s marketplace there are several methods market participants can use to size up publicly traded companies. Two of the most underrated methods are hedge fund and insider trading moves. Our researchers have shown that, historically, those who follow the best picks of the top fund managers can outclass the S&P 500 by a superb margin (see the details here). 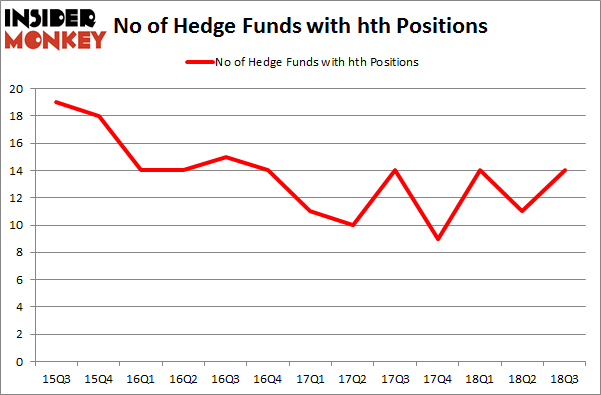 The largest stake in Hilltop Holdings Inc. (NYSE:HTH) was held by Millennium Management, which reported holding $38.8 million worth of stock at the end of September. It was followed by Basswood Capital with a $37.1 million position. Other investors bullish on the company included GLG Partners, Royce & Associates, and D E Shaw.

As one would reasonably expect, specific money managers have jumped into Hilltop Holdings Inc. (NYSE:HTH) headfirst. Castine Capital Management, managed by Paul Magidson, Jonathan Cohen. And Ostrom Enders, created the most outsized position in Hilltop Holdings Inc. (NYSE:HTH). Castine Capital Management had $2.4 million invested in the company at the end of the quarter. Jim Simons’s Renaissance Technologies also made a $2.2 million investment in the stock during the quarter.

As you can see these stocks had an average of 14 hedge funds with bullish positions and the average amount invested in these stocks was $152 million. That figure was $136 million in HTH’s case. Orion Engineered Carbons SA (NYSE:OEC) is the most popular stock in this table. On the other hand Cohen & Steers, Inc. (NYSE:CNS) is the least popular one with only 9 bullish hedge fund positions. Hilltop Holdings Inc. (NYSE:HTH) is not the least popular stock in this group but hedge fund interest is still below average. This is a slightly negative signal and we’d rather spend our time researching stocks that hedge funds are piling on. In this regard OEC might be a better candidate to consider a long position.