Hedge funds and other investment firms that we track manage billions of dollars of their wealthy clients’ money, and needless to say, they are painstakingly thorough when analyzing where to invest this money, as their own wealth depends on it. Regardless of the various methods used by successful investors like David Tepper and Dan Loeb, the resources they expend are second-to-none. This is especially valuable when it comes to small-cap stocks, which is where they generate their strongest outperformance, as their resources give them a huge edge when it comes to studying these stocks compared to the average investor, which is why we intently follow their activity in the small-cap space.

Grupo Aeroportuario del Sureste (ADR) (NYSE:ASR) has experienced an increase in hedge fund sentiment of late. There were 8 hedge funds in our database with ASR holdings at the end of the previous quarter. At the end of this article we will also compare ASR to other stocks including Guidewire Software Inc (NYSE:GWRE), Ubiquiti Networks Inc (NASDAQ:UBNT), and DCT Industrial Trust Inc. (NYSE:DCT) to get a better sense of its popularity.

With all of this in mind, let’s analyze the recent action encompassing Grupo Aeroportuario del Sureste (ADR) (NYSE:ASR).

What does the smart money think about Grupo Aeroportuario del Sureste (ADR) (NYSE:ASR)?

At Q3’s end, a total of 9 of the hedge funds tracked by Insider Monkey were bullish on this stock, a change of 13% from one quarter earlier. The graph below displays the number of hedge funds with bullish position in ASR over the last 5 quarters. With hedge funds’ capital changing hands, there exists an “upper tier” of noteworthy hedge fund managers who were increasing their holdings considerably (or already accumulated large positions). 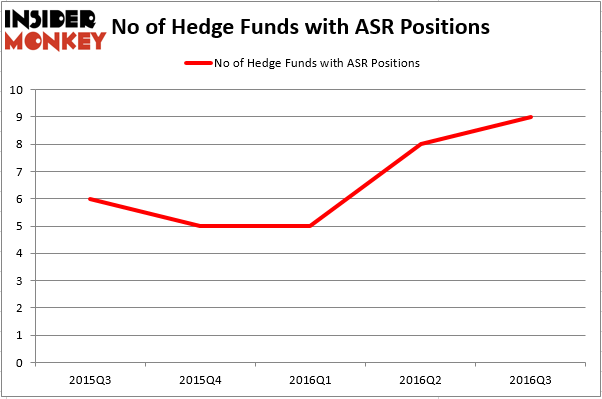 Of the funds tracked by Insider Monkey, Renaissance Technologies, one of the biggest hedge funds in the world, has the largest position in Grupo Aeroportuario del Sureste (ADR) (NYSE:ASR), worth close to $16.2 million, corresponding to less than 0.1%% of its total 13F portfolio. Coming in second is Arrowstreet Capital, led by Peter Rathjens, Bruce Clarke and John Campbell, which holds a $11.6 million position; less than 0.1%% of its 13F portfolio is allocated to the company. Remaining peers that hold long positions encompass Michael Moriarty’s Teewinot Capital Advisers, Cliff Asness’s AQR Capital Management and Israel Englander’s Millennium Management. We should note that none of these hedge funds are among our list of the 100 best performing hedge funds which is based on the performance of their 13F long positions in non-microcap stocks.