Is Graham Holdings Co (NYSE:GHC) the right pick for your portfolio? The best stock pickers are becoming less hopeful. The number of bullish hedge fund bets decreased by 5 recently. Our calculations also showed that GHC isn’t among the 30 most popular stocks among hedge funds.

What does the smart money think about Graham Holdings Co (NYSE:GHC)? 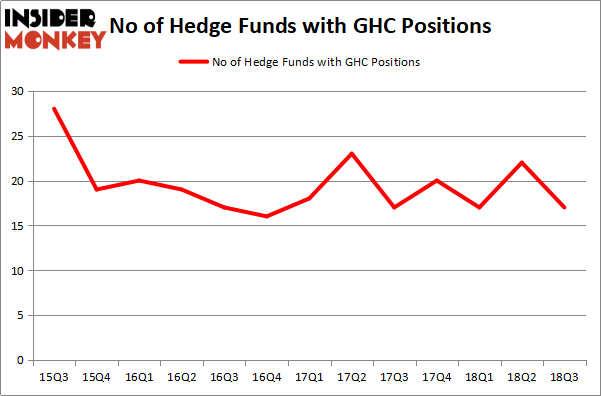 Of the funds tracked by Insider Monkey, Mason Hawkins’s Southeastern Asset Management has the largest position in Graham Holdings Co (NYSE:GHC), worth close to $392 million, comprising 4.7% of its total 13F portfolio. Sitting at the No. 2 spot is Scott Wallace of Wallace Capital Management, with a $70.3 million position; 8.9% of its 13F portfolio is allocated to the company. Remaining members of the smart money that are bullish contain Cliff Asness’s AQR Capital Management, Jim Simons’s Renaissance Technologies and Noam Gottesman’s GLG Partners.

Judging by the fact that Graham Holdings Co (NYSE:GHC) has witnessed a decline in interest from the aggregate hedge fund industry, it’s easy to see that there were a few funds who were dropping their entire stakes last quarter. It’s worth mentioning that Peter Rathjens, Bruce Clarke and John Campbell’s Arrowstreet Capital sold off the biggest position of the 700 funds followed by Insider Monkey, worth close to $4.4 million in stock, and Michael Platt and William Reeves’s BlueCrest Capital Mgmt. was right behind this move, as the fund cut about $1 million worth. These moves are important to note, as aggregate hedge fund interest dropped by 5 funds last quarter.

As you can see these stocks had an average of 21 hedge funds with bullish positions and the average amount invested in these stocks was $516 million. That figure was $587 million in GHC’s case. Wright Medical Group N.V. (NASDAQ:WMGI) is the most popular stock in this table. On the other hand Kennedy-Wilson Holdings Inc (NYSE:KW) is the least popular one with only 12 bullish hedge fund positions. Graham Holdings Co (NYSE:GHC) is not the least popular stock in this group but hedge fund interest is still below average. This is a slightly negative signal and we’d rather spend our time researching stocks that hedge funds are piling on. In this regard WMGI might be a better candidate to consider a long position.