Does Fluidigm Corporation (NASDAQ:FLDM) represent a good buying opportunity at the moment? Let’s briefly check the hedge fund interest towards the company. Hedge fund firms constantly search out bright intellectuals and highly-experienced employees and throw away millions of dollars on research activities, so it is no wonder why they tend to generate millions in profits each year. It is also true that some hedge fund players fail inconceivably on some occasions, but their stock picks have been generating superior risk-adjusted returns on average over the years.

Fluidigm Corporation (NASDAQ:FLDM) shares haven’t seen a lot of action during the third quarter. Overall, hedge fund sentiment was unchanged. The stock was in 12 hedge funds’ portfolios at the end of the third quarter of 2018. The level and the change in hedge fund popularity aren’t the only variables you need to analyze to decipher hedge funds’ perspectives. A stock may witness a boost in popularity but it may still be less popular than similarly priced stocks. That’s why at the end of this article we will examine companies such as Reliant Bancorp, Inc. (NASDAQ:RBNC), BlueLinx Holdings Inc. (NYSE:BXC), and Industrea Acquisition Corp. (NASDAQ:INDU) to gather more data points.

We’re going to take a look at the latest hedge fund action regarding Fluidigm Corporation (NASDAQ:FLDM). 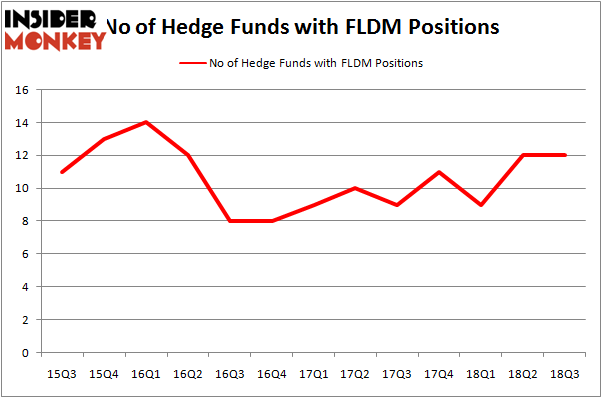 Among these funds, Levin Capital Strategies held the most valuable stake in Fluidigm Corporation (NASDAQ:FLDM), which was worth $76.4 million at the end of the third quarter. On the second spot was Renaissance Technologies which amassed $8.6 million worth of shares. Moreover, OrbiMed Advisors, Endurant Capital Management, and Millennium Management were also bullish on Fluidigm Corporation (NASDAQ:FLDM), allocating a large percentage of their portfolios to this stock.

We view hedge fund activity in the stock unfavorable, but in this case there was only a single hedge fund selling its entire position: LMR Partners. One hedge fund selling its entire position doesn’t always imply a bearish intent. Theoretically a hedge fund may decide to sell a promising position in order to invest the proceeds in a more promising idea. However, we don’t think this is the case in this case because only one of the 800+ hedge funds tracked by Insider Monkey identified as a viable investment and initiated a position in the stock (that fund was Pura Vida Investments).

As you can see these stocks had an average of 7.25 hedge funds with bullish positions and the average amount invested in these stocks was $27 million. That figure was $105 million in FLDM’s case. BlueLinx Holdings Inc. (NYSE:BXC) is the most popular stock in this table. On the other hand Reliant Bancorp, Inc. (NASDAQ:RBNC) is the least popular one with only 2 bullish hedge fund positions. Fluidigm Corporation (NASDAQ:FLDM) is not the most popular stock in this group but hedge fund interest is still above average. This is a slightly positive signal but we’d rather spend our time researching stocks that hedge funds are piling on. In this regard BXC might be a better candidate to consider a long position.