We at Insider Monkey have gone over 700 13F filings that hedge funds and prominent investors are required to file by the SEC. The 13F filings show the funds’ and investors’ portfolio positions as of September 30th. In this article we look at what those investors think of EPAM Systems Inc (NYSE:EPAM).

EPAM Systems Inc (NYSE:EPAM) was in 21 hedge funds’ portfolios at the end of September. EPAM investors should be aware of a decrease in support from the world’s most elite money managers of late. There were 22 hedge funds in our database with EPAM positions at the end of the previous quarter. Our calculations also showed that EPAM isn’t among the 30 most popular stocks among hedge funds. 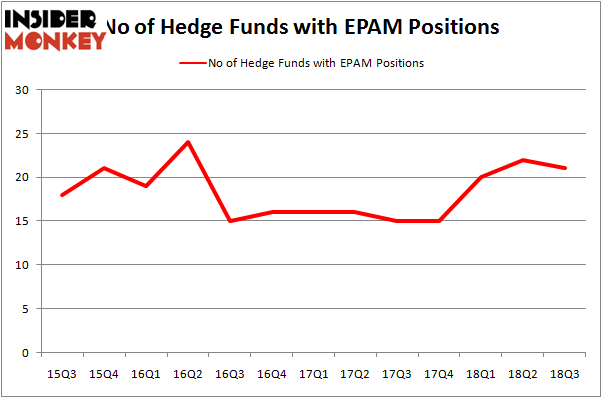 According to publicly available hedge fund and institutional investor holdings data compiled by Insider Monkey, James Crichton’s Hitchwood Capital Management has the number one position in EPAM Systems Inc (NYSE:EPAM), worth close to $41.3 million, accounting for 0.6% of its total 13F portfolio. Coming in second is Richard Driehaus of Driehaus Capital, with a $34.4 million position; 1.1% of its 13F portfolio is allocated to the stock. Other members of the smart money that are bullish comprise Ken Griffin’s Citadel Investment Group, Israel Englander’s Millennium Management and Brad Farber’s Atika Capital.

Since EPAM Systems Inc (NYSE:EPAM) has witnessed bearish sentiment from the aggregate hedge fund industry, we can see that there lies a certain “tier” of funds that elected to cut their positions entirely heading into Q3. Interestingly, Peter Rathjens, Bruce Clarke and John Campbell’s Arrowstreet Capital dropped the largest position of the 700 funds tracked by Insider Monkey, valued at close to $14.6 million in stock, and Hugh Sloane’s Sloane Robinson Investment Management was right behind this move, as the fund dumped about $7.2 million worth. These moves are important to note, as total hedge fund interest dropped by 1 funds heading into Q3.

Let’s go over hedge fund activity in other stocks – not necessarily in the same industry as EPAM Systems Inc (NYSE:EPAM) but similarly valued. We will take a look at RingCentral Inc (NYSE:RNG), Logitech International SA (NASDAQ:LOGI), Nutanix, Inc. (NASDAQ:NTNX), and Ares Capital Corporation (NASDAQ:ARCC). This group of stocks’ market valuations are closest to EPAM’s market valuation.

As you can see these stocks had an average of 31.25 hedge funds with bullish positions and the average amount invested in these stocks was $577 million. That figure was $165 million in EPAM’s case. RingCentral Inc (NYSE:RNG) is the most popular stock in this table. On the other hand Logitech International SA (NASDAQ:LOGI) is the least popular one with only 19 bullish hedge fund positions. EPAM Systems Inc (NYSE:EPAM) is not the least popular stock in this group but hedge fund interest is still below average. This is a slightly negative signal and we’d rather spend our time researching stocks that hedge funds are piling on. In this regard RNG might be a better candidate to consider a long position.