Endo International plc (NASDAQ:ENDP) shares haven’t seen a lot of action during the third quarter. Overall, hedge fund sentiment was unchanged. The stock was in 22 hedge funds’ portfolios at the end of the third quarter of 2018. The level and the change in hedge fund popularity aren’t the only variables you need to analyze to decipher hedge funds’ perspectives. A stock may witness a boost in popularity but it may still be less popular than similarly priced stocks. That’s why at the end of this article we will examine companies such as John Bean Technologies Corporation (NYSE:JBT), United Bankshares, Inc. (NASDAQ:UBSI), and Eldorado Resorts Inc (NASDAQ:ERI) to gather more data points.

While collecting data for our write-up, we came across Miller Value Partners’ third-quarter 2018 letter to shareholders, that gives its opinion on Endo International. The fund said the company was a positive net contributor to the fund and had this to say about it in the letter:

“Supervalu along with our holdings in Endo International (ENDP) and Unisys (UIS) were significant positive contributors during the quarter pushing the Deep Value strategies ahead of the S&P 500.”

Our readers will be interested to know that Joseph Matthew Maletta, EVP and Chief Legal Officer at the company, was responsible for the last major insider purchase of Endo International common stock, snapping up 3,000 shares at $8.02 per share in 2017. With the stock currently trading at $10.19, it was certainly a lucrative purchase.

What does the smart money think about Endo International plc (NASDAQ:ENDP)? 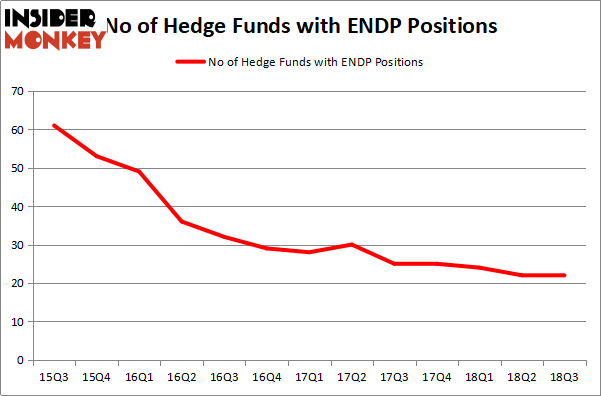 More specifically, Glenview Capital was the largest shareholder of Endo International plc (NASDAQ:ENDP), with a stake worth $219.2 million reported as of the end of September. Trailing Glenview Capital was Renaissance Technologies, which amassed a stake valued at $161.7 million. Paulson & Co, D E Shaw, and Millennium Management were also very fond of the stock, giving the stock large weights in their portfolios.

Due to the fact that Endo International plc (NASDAQ:ENDP) has experienced falling interest from hedge fund managers, it’s easy to see that there were a few funds who sold off their full holdings last quarter. Interestingly, Kevin Kotler’s Broadfin Capital cut the largest stake of all the hedgies followed by Insider Monkey, comprising about $24.4 million in stock, and Stephen DuBois’s Camber Capital Management was right behind this move, as the fund sold off about $23.6 million worth. These transactions are intriguing to say the least, as total hedge fund interest stayed the same (this is a bearish signal in our experience).

As you can see these stocks had an average of 18.75 hedge funds with bullish positions and the average amount invested in these stocks was $380 million. That figure was $775 million in ENDP’s case. Patterson-UTI Energy, Inc. (NASDAQ:PTEN) is the most popular stock in this table. On the other hand United Bankshares, Inc. (NASDAQ:UBSI) is the least popular one with only 7 bullish hedge fund positions. Endo International plc (NASDAQ:ENDP) is not the most popular stock in this group but hedge fund interest is still above average. This is a slightly positive signal but we’d rather spend our time researching stocks that hedge funds are piling on. In this regard PTEN might be a better candidate to consider a long position.