Investing in small cap stocks has historically been a way to outperform the market, as small cap companies typically grow faster on average than the blue chips. That outperformance comes with a price, however, as there are occasional periods of higher volatility. The one and a half month time period since the end of the third quarter is one of those periods, as the Russell 2000 ETF (IWM) has underperformed the larger S&P 500 ETF (SPY) by about 4 percentage points. Given that the funds we track tend to have a disproportionate amount of their portfolios in smaller cap stocks, they have seen some volatility in their portfolios too. Actually their moves are potentially one of the factors that contributed to this volatility. In this article, we use our extensive database of hedge fund holdings to find out what the smart money thinks of Employers Holdings, Inc. (NYSE:EIG).

In the eyes of most traders, hedge funds are assumed to be worthless, outdated investment tools of years past. While there are greater than 8,000 funds with their doors open at the moment, We hone in on the upper echelon of this group, around 700 funds. It is estimated that this group of investors command bulk of the smart money’s total capital, and by shadowing their best stock picks, Insider Monkey has spotted many investment strategies that have historically beaten the S&P 500 index. Insider Monkey’s flagship hedge fund strategy exceeded the S&P 500 index by 6 percentage points annually since its inception in May 2014 through early November 2018. We were able to generate large returns even by identifying short candidates. Our portfolio of short stocks lost 24% since February 2017 (through December 3rd) even though the market was up nearly 23% during the same period. We just shared a list of 11 short targets in our latest quarterly update.

How have hedgies been trading Employers Holdings, Inc. (NYSE:EIG)? 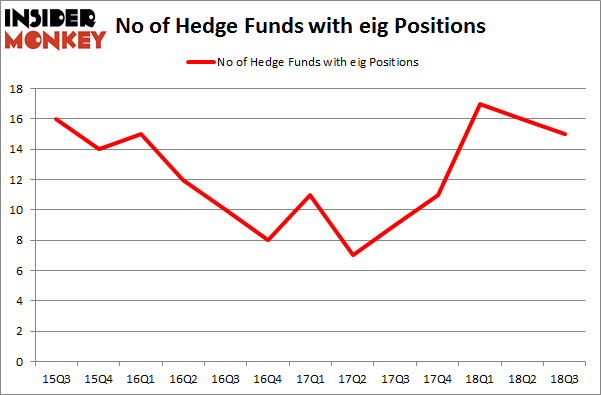 More specifically, AQR Capital Management was the largest shareholder of Employers Holdings, Inc. (NYSE:EIG), with a stake worth $14.3 million reported as of the end of September. Trailing AQR Capital Management was Renaissance Technologies, which amassed a stake valued at $11.7 million. Millennium Management, GLG Partners, and Marshall Wace LLP were also very fond of the stock, giving the stock large weights in their portfolios.

Due to the fact that Employers Holdings, Inc. (NYSE:EIG) has faced a decline in interest from the aggregate hedge fund industry, logic holds that there were a few fund managers that elected to cut their full holdings in the third quarter. Intriguingly, Dmitry Balyasny’s Balyasny Asset Management dumped the largest investment of the “upper crust” of funds monitored by Insider Monkey, totaling an estimated $0.8 million in stock. Matthew Tewksbury’s fund, Stevens Capital Management, also dropped its stock, about $0.3 million worth. These bearish behaviors are intriguing to say the least, as total hedge fund interest fell by 1 funds in the third quarter.

As you can see these stocks had an average of 16.25 hedge funds with bullish positions and the average amount invested in these stocks was $141 million. That figure was $68 million in EIG’s case. Tronox Limited (NYSE:TROX) is the most popular stock in this table. On the other hand Eaton Vance Ltd Duration Income Fund (NYSE:EVV) is the least popular one with only 5 bullish hedge fund positions. Employers Holdings, Inc. (NYSE:EIG) is not the least popular stock in this group but hedge fund interest is still below average. This is a slightly negative signal and we’d rather spend our time researching stocks that hedge funds are piling on. In this regard TROX might be a better candidate to consider a long position.