Most investors tend to think that hedge funds and other asset managers are worthless, as they cannot beat even simple index fund portfolios. In fact, most people expect hedge funds to compete with and outperform the bull market that we have witnessed in recent years. However, hedge funds are generally partially hedged and aim at delivering attractive risk-adjusted returns rather than following the ups and downs of equity markets hoping that they will outperform the broader market. Our research shows that certain hedge funds do have great stock picking skills (and we can identify these hedge funds in advance pretty accurately), so let’s take a glance at the smart money sentiment towards Deere & Company (NYSE:DE).

Deere & Company (NYSE:DE) shares haven’t seen a lot of action during the third quarter. Overall, hedge fund sentiment was unchanged. The stock was in 40 hedge funds’ portfolios at the end of September. The level and the change in hedge fund popularity aren’t the only variables you need to analyze to decipher hedge funds’ perspectives. A stock may witness a boost in popularity but it may still be less popular than similarly priced stocks. That’s why at the end of this article we will examine companies such as Brookfield Asset Management Inc. (NYSE:BAM), General Dynamics Corporation (NYSE:GD), and HDFC Bank Limited (NYSE:HDB) to gather more data points. Our calculations also showed that DE isn’t among the 30 most popular stocks among hedge funds.

In today’s marketplace there are several gauges investors employ to assess stocks. Two of the most under-the-radar gauges are hedge fund and insider trading activity. Our researchers have shown that, historically, those who follow the top picks of the best investment managers can outclass the broader indices by a superb amount (see the details here).

Unlike the largest US hedge funds that are convinced Dow will soar past 40,000 or the world’s most bearish hedge fund that’s more convinced than ever that a crash is coming, our long-short investment strategy doesn’t rely on bull or bear markets to deliver double digit returns. We only rely on the best performing hedge funds‘ buy/sell signals. Let’s take a peek at the new hedge fund action surrounding Deere & Company (NYSE:DE).

What have hedge funds been doing with Deere & Company (NYSE:DE)?

At Q3’s end, a total of 40 of the hedge funds tracked by Insider Monkey were bullish on this stock, a change of 0% from one quarter earlier. On the other hand, there were a total of 37 hedge funds with a bullish position in DE a year ago. With the smart money’s positions undergoing their usual ebb and flow, there exists a few noteworthy hedge fund managers who were increasing their stakes considerably (or already accumulated large positions). 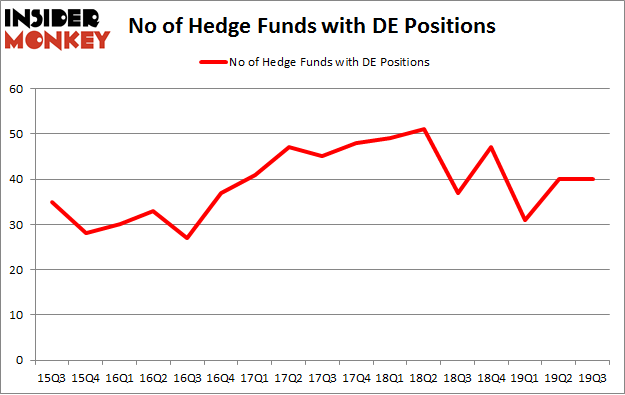 More specifically, Generation Investment Management was the largest shareholder of Deere & Company (NYSE:DE), with a stake worth $716 million reported as of the end of September. Trailing Generation Investment Management was Markel Gayner Asset Management, which amassed a stake valued at $169.7 million. Holocene Advisors, Adage Capital Management, and Citadel Investment Group were also very fond of the stock, becoming one of the largest hedge fund holders of the company. In terms of the portfolio weights assigned to each position Firefly Value Partners allocated the biggest weight to Deere & Company (NYSE:DE), around 9.87% of its portfolio. Harvest Capital Strategies is also relatively very bullish on the stock, setting aside 6.41 percent of its 13F equity portfolio to DE.

Due to the fact that Deere & Company (NYSE:DE) has witnessed bearish sentiment from the aggregate hedge fund industry, we can see that there is a sect of hedge funds who were dropping their entire stakes last quarter. Intriguingly, Mike Masters’s Masters Capital Management said goodbye to the largest stake of all the hedgies watched by Insider Monkey, valued at about $33.1 million in stock. Gregg Moskowitz’s fund, Interval Partners, also said goodbye to its stock, about $14 million worth. These moves are interesting, as aggregate hedge fund interest stayed the same (this is a bearish signal in our experience).

As you can see these stocks had an average of 38 hedge funds with bullish positions and the average amount invested in these stocks was $3480 million. That figure was $1818 million in DE’s case. Uber Technologies, Inc. (NYSE:UBER) is the most popular stock in this table. On the other hand Brookfield Asset Management Inc. (NYSE:BAM) is the least popular one with only 31 bullish hedge fund positions. Deere & Company (NYSE:DE) is not the most popular stock in this group but hedge fund interest is still above average. This is a slightly positive signal but we’d rather spend our time researching stocks that hedge funds are piling on. Our calculations showed that top 20 most popular stocks among hedge funds returned 34.7% in 2019 through November 22nd and outperformed the S&P 500 ETF (SPY) by 8.5 percentage points. Unfortunately DE wasn’t nearly as popular as these 20 stocks and hedge funds that were betting on DE were disappointed as the stock returned 4% during the fourth quarter (through 11/22) and underperformed the market. If you are interested in investing in large cap stocks with huge upside potential, you should check out the top 20 most popular stocks among hedge funds as many of these stocks already outperformed the market so far this year.