The elite funds run by legendary investors such as Dan Loeb and David Tepper make hundreds of millions of dollars for themselves and their investors by spending enormous resources doing research on small cap stocks that big investment banks don’t follow. Because of their pay structures, they have strong incentive to do the research necessary to beat the market. That’s why we pay close attention to what they think in small cap stocks. In this article, we take a closer look at Dean Foods Company (NYSE:DF) from the perspective of those elite funds.

Dean Foods Company (NYSE:DF) has seen an increase in hedge fund sentiment of late. DF was in 23 hedge funds’ portfolios at the end of September. There were 19 hedge funds in our database with DF holdings at the end of the previous quarter. Our calculations also showed that DF isn’t among the 30 most popular stocks among hedge funds.

How have hedgies been trading Dean Foods Company (NYSE:DF)? 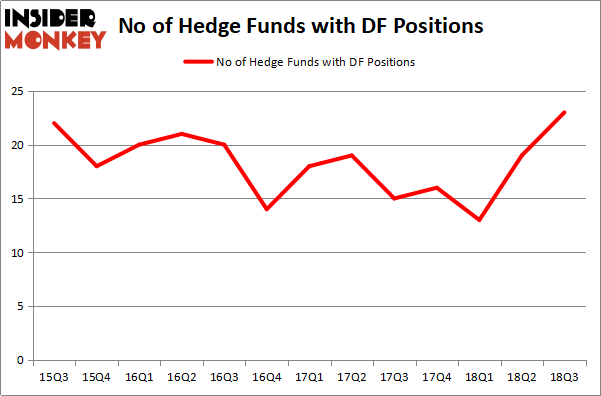 According to Insider Monkey’s hedge fund database, Jim Simons’s Renaissance Technologies has the most valuable position in Dean Foods Company (NYSE:DF), worth close to $14.1 million, comprising less than 0.1%% of its total 13F portfolio. Sitting at the No. 2 spot is AQR Capital Management, managed by Cliff Asness, which holds a $10.9 million position; the fund has less than 0.1%% of its 13F portfolio invested in the stock. Some other hedge funds and institutional investors that are bullish consist of Israel Englander’s Millennium Management, Andrew Feldstein and Stephen Siderow’s Blue Mountain Capital and Joel Greenblatt’s Gotham Asset Management.

As one would reasonably expect, key hedge funds were leading the bulls’ herd. Arrowstreet Capital, managed by Peter Rathjens, Bruce Clarke and John Campbell, initiated the most valuable position in Dean Foods Company (NYSE:DF). Arrowstreet Capital had $0.8 million invested in the company at the end of the quarter. Roger Ibbotson’s Zebra Capital Management also initiated a $0.1 million position during the quarter. The other funds with brand new DF positions are Guy Shahar’s DSAM Partners and Ben Levine, Andrew Manuel and Stefan Renold’s LMR Partners.

As you can see these stocks had an average of 10 hedge funds with bullish positions and the average amount invested in these stocks was $33 million. That figure was $54 million in DF’s case. Extreme Networks, Inc (NASDAQ:EXTR) is the most popular stock in this table. On the other hand Invesco Trust for Investment Grade Municipals (NYSE:VGM) is the least popular one with only 2 bullish hedge fund positions. Compared to these stocks Dean Foods Company (NYSE:DF) is more popular among hedge funds. Considering that hedge funds are fond of this stock in relation to its market cap peers, it may be a good idea to analyze it in detail and potentially include it in your portfolio.