Although the masses and most of the financial media blame hedge funds for their exorbitant fee structure and disappointing performance, these investors have proved to have great stock picking abilities over the years (that’s why their assets under management continue to swell). We believe hedge fund sentiment should serve as a crucial tool of an individual investor’s stock selection process, as it may offer great insights of how the brightest minds of the finance industry feel about specific stocks. After all, these people have access to smartest analysts and expensive data/information sources that individual investors can’t match. So should one consider investing in CorePoint Lodging Inc. (NYSE:CPLG)? The smart money sentiment can provide an answer to this question.

CorePoint Lodging Inc. (NYSE:CPLG) was in 23 hedge funds’ portfolios at the end of September, hence the company wasn’t one of the 30 most popular stocks among hedge funds in Q3 of 2018. Nevertheless, the stock has seen an increase in enthusiasm from smart money of late, as there were 20 hedge funds in our database with CPLG positions at the end of the previous quarter.

In the 21st century investor’s toolkit there are many formulas stock traders can use to analyze publicly traded companies. Some of the most innovative formulas are hedge fund and insider trading indicators. We have shown that, historically, those who follow the best picks of the elite money managers can outpace their index-focused peers by a solid amount (see the details here).

“Corepoint Lodging Inc. which was spun off from La Quinta Holdings Inc. in the second quarter of 2018, gave lower-than- expected initial 2018 earnings guidance, driven in large part by labor-cost pressures. The company also announced that the tax refund associated with its split from La Quinta will be lower than initially anticipated, and that its online travel agent rates would not benefit as much as previously expected from its new affiliation with Wyndham Hotels & Resorts.” – As reported in First Eagle Fund of America’s Q3 Commentary.

How have hedgies been trading CorePoint Lodging Inc. (NYSE:CPLG)?

Heading into the fourth quarter of 2018, a total of 23 of the hedge funds tracked by Insider Monkey were bullish on this stock, a change of 15% from the previous quarter. Below, you can check out the change in hedge fund sentiment towards CPLG over the last 13 quarters. With hedgies’ positions undergoing their usual ebb and flow, there exists a few notable hedge fund managers who were boosting their holdings meaningfully (or already accumulated large positions). 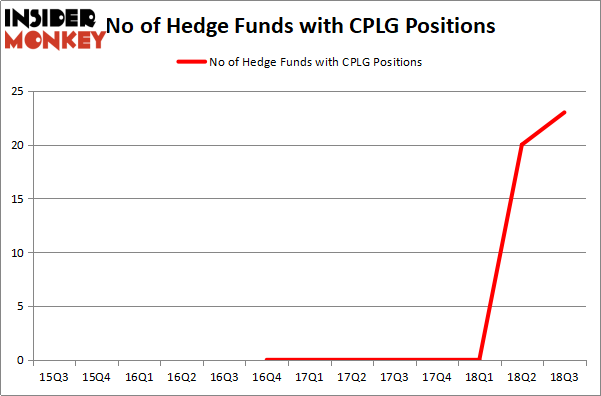 Among these funds, Governors Lane held the most valuable stake in CorePoint Lodging Inc. (NYSE:CPLG), which was worth $40.7 million at the end of the third quarter. On the second spot was Millennium Management which amassed $31.8 million worth of shares. Moreover, HBK Investments, Everett Capital Advisors, and Highline Capital Management were also bullish on CorePoint Lodging Inc. (NYSE:CPLG), allocating a large percentage of their portfolios to this stock.

As one would reasonably expect, specific money managers were breaking ground themselves. Governors Lane, managed by Isaac Corre, created the largest position in CorePoint Lodging Inc. (NYSE:CPLG). Governors Lane had $40.7 million invested in the company at the end of the quarter. David Brown’s Hawk Ridge Management also made a $1.7 million investment in the stock during the quarter. The other funds with new positions in the stock are Ken Griffin’s Citadel Investment Group, Paul Marshall and Ian Wace’s Marshall Wace LLP, and Alec Litowitz and Ross Laser’s Magnetar Capital.

As you can see these stocks had an average of 12 hedge funds with bullish positions and the average amount invested in these stocks was $119 million. That figure was $239 million in CPLG’s case. InVitae Corp (NYSE:NVTA) is the most popular stock in this table. On the other hand Hannon Armstrong Sustnbl Infrstr Cap Inc (NYSE:HASI) is the least popular one with only 6 bullish hedge fund positions. Compared to these stocks CorePoint Lodging Inc. (NYSE:CPLG) is more popular among hedge funds. Considering that hedge funds are fond of this stock in relation to its market cap peers, it may be a good idea to analyze it in detail and potentially include it in your portfolio.