Companhia Energetica Minas Gerais (NYSE:CIG) shareholders have witnessed a decrease in support from the world’s most elite money managers of late. CIG was in 6 hedge funds’ portfolios at the end of September. There were 7 hedge funds in our database with CIG positions at the end of the previous quarter. Our calculations also showed that CIG isn’t among the 30 most popular stocks among hedge funds.

According to most shareholders, hedge funds are perceived as underperforming, outdated financial vehicles of yesteryear. While there are greater than 8,000 funds in operation at the moment, We choose to focus on the bigwigs of this group, approximately 700 funds. Most estimates calculate that this group of people command the lion’s share of the hedge fund industry’s total asset base, and by observing their best stock picks, Insider Monkey has formulated various investment strategies that have historically surpassed the market. Insider Monkey’s flagship hedge fund strategy outperformed the S&P 500 index by 6 percentage points per annum since its inception in May 2014 through early November 2018. We were able to generate large returns even by identifying short candidates. Our portfolio of short stocks lost 24% since February 2017 (through December 3rd) even though the market was up nearly 23% during the same period. We just shared a list of 11 short targets in our latest quarterly update.

What have hedge funds been doing with Companhia Energetica Minas Gerais (NYSE:CIG)?

At the end of the third quarter, a total of 6 of the hedge funds tracked by Insider Monkey held long positions in this stock, a change of -14% from one quarter earlier. The graph below displays the number of hedge funds with bullish position in CIG over the last 13 quarters. With hedge funds’ sentiment swirling, there exists a few key hedge fund managers who were upping their holdings considerably (or already accumulated large positions). 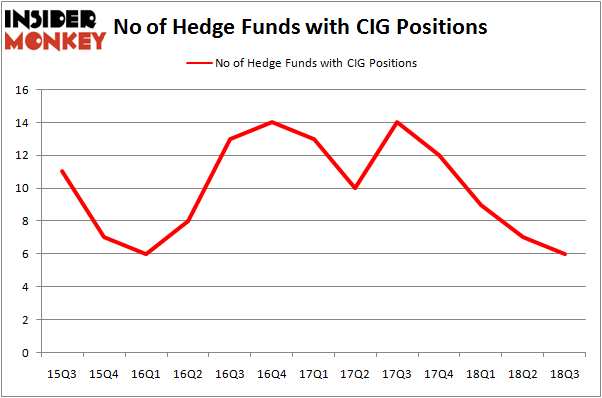 Among these funds, AQR Capital Management held the most valuable stake in Companhia Energetica Minas Gerais (NYSE:CIG), which was worth $1.4 million at the end of the third quarter. On the second spot was Millennium Management which amassed $1 million worth of shares. Moreover, Citadel Investment Group, Two Sigma Advisors, and BlueCrest Capital Mgmt. were also bullish on Companhia Energetica Minas Gerais (NYSE:CIG), allocating a large percentage of their portfolios to this stock.

We view hedge fund activity in the stock unfavorable, but in this case there was only a single hedge fund selling its entire position: King Street Capital. One hedge fund selling its entire position doesn’t always imply a bearish intent. Theoretically a hedge fund may decide to sell a promising position in order to invest the proceeds in a more promising idea. However, we don’t think this is the case in this case because none of the 700+ hedge funds tracked by Insider Monkey identified CIG as a viable investment and initiated a position in the stock.

As you can see these stocks had an average of 13.75 hedge funds with bullish positions and the average amount invested in these stocks was $120 million. That figure was $4 million in CIG’s case. LifePoint Health, Inc. (NASDAQ:LPNT) is the most popular stock in this table. On the other hand Great Western Bancorp Inc (NYSE:GWB) is the least popular one with only 8 bullish hedge fund positions. Compared to these stocks Companhia Energetica Minas Gerais (NYSE:CIG) is even less popular than GWB. Considering that hedge funds aren’t fond of this stock in relation to other companies analyzed in this article, it may be a good idea to analyze it in detail and understand why the smart money isn’t behind this stock. This isn’t necessarily bad news. Although it is possible that hedge funds may think the stock is overpriced and view the stock as a short candidate, they may not be very familiar with the bullish thesis. In either case more research is warranted.