Many investors, including Paul Tudor Jones or Stan Druckenmiller, have been saying for a while now that the current market is overvalued due to a low interest rate environment that leads to companies swapping their equity for debt and focusing mostly on short-term performance such as beating the quarterly earnings estimates. In the fourth quarter, many investors lost money due to unpredictable events such as the sudden increase in long-term interest rates and unintended consequences of the trade war with China. Nevertheless, many of the stocks that tanked in the third quarter still sport strong fundamentals and their decline was more related to the general market sentiment rather than their individual performance and hedge funds kept their bullish stance. In this article we will find out how hedge fund sentiment to Columbia Sportswear Company (NASDAQ:COLM) changed recently.

Columbia Sportswear Company (NASDAQ:COLM) shares haven’t seen a lot of action during the third quarter. Overall, hedge fund sentiment was unchanged. The stock was in 23 hedge funds’ portfolios at the end of September. At the end of this article we will also compare COLM to other stocks including The Trade Desk, Inc. (NASDAQ:TTD), Charles River Laboratories International Inc. (NYSE:CRL), and Arrow Electronics, Inc. (NYSE:ARW) to get a better sense of its popularity.

What have hedge funds been doing with Columbia Sportswear Company (NASDAQ:COLM)?

Heading into the fourth quarter of 2018, a total of 23 of the hedge funds tracked by Insider Monkey were bullish on this stock, a change of 0% from one quarter earlier. Below, you can check out the change in hedge fund sentiment towards COLM over the last 13 quarters. So, let’s find out which hedge funds were among the top holders of the stock and which hedge funds were making big moves. 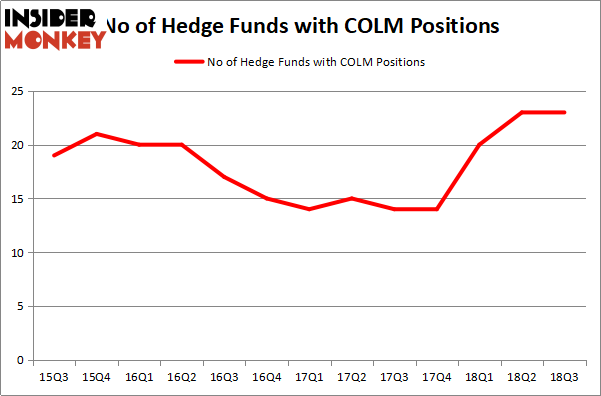 Among these funds, Arrowstreet Capital held the most valuable stake in Columbia Sportswear Company (NASDAQ:COLM), which was worth $29.2 million at the end of the third quarter. On the second spot was Royce & Associates which amassed $26.7 million worth of shares. Moreover, Marshall Wace LLP, Two Sigma Advisors, and Millennium Management were also bullish on Columbia Sportswear Company (NASDAQ:COLM), allocating a large percentage of their portfolios to this stock.

Due to the fact that Columbia Sportswear Company (NASDAQ:COLM) has experienced a decline in interest from the entirety of the hedge funds we track, logic holds that there were a few hedge funds that slashed their entire stakes heading into Q3. At the top of the heap, Joel Greenblatt’s Gotham Asset Management dropped the largest investment of all the hedgies watched by Insider Monkey, comprising close to $7.5 million in stock, and Ben Levine, Andrew Manuel and Stefan Renold’s LMR Partners was right behind this move, as the fund dumped about $3.4 million worth. These bearish behaviors are intriguing to say the least, as aggregate hedge fund interest stayed the same (this is a bearish signal in our experience).

As you can see these stocks had an average of 24.75 hedge funds with bullish positions and the average amount invested in these stocks was $585 million. That figure was $180 million in COLM’s case. Transocean Ltd (NYSE:RIG) is the most popular stock in this table. On the other hand The Trade Desk, Inc. (NASDAQ:TTD) is the least popular one with only 14 bullish hedge fund positions. Columbia Sportswear Company (NASDAQ:COLM) is not the least popular stock in this group but hedge fund interest is still below average. This is a slightly negative signal and we’d rather spend our time researching stocks that hedge funds are piling on. In this regard RIG might be a better candidate to consider a long position.