While the market driven by short-term sentiment influenced by uncertainty regarding the future of the interest rate environment in the US, declining oil prices and the trade war with China, many smart money investors are keeping their optimism regarding the current bull run, while still hedging many of their long positions. However, as we know, big investors usually buy stocks with strong fundamentals, which is why we believe we can profit from imitating them. In this article, we are going to take a look at the smart money sentiment surrounding CNX Resources Corporation (NYSE:CNX).

CNX Resources Corporation (NYSE:CNX) shares haven’t seen a lot of action during the third quarter. Overall, hedge fund sentiment was unchanged. The stock was in 23 hedge funds’ portfolios at the end of the third quarter of 2018. At the end of this article we will also compare CNX to other stocks including SiteOne Landscape Supply, Inc. (NYSE:SITE), Altera Corporation (NASDAQ:ALTR), and Penn National Gaming, Inc (NASDAQ:PENN) to get a better sense of its popularity.

In the 21st century investor’s toolkit there are numerous metrics shareholders can use to evaluate stocks. Some of the most underrated metrics are hedge fund and insider trading activity. We have shown that, historically, those who follow the top picks of the elite money managers can beat the broader indices by a superb amount (see the details here).

How have hedgies been trading CNX Resources Corporation (NYSE:CNX)?

At the end of the third quarter, a total of 23 of the hedge funds tracked by Insider Monkey were long this stock, no change from the second quarter of 2018. Below, you can check out the change in hedge fund sentiment towards CNX over the last 13 quarters. So, let’s review which hedge funds were among the top holders of the stock and which hedge funds were making big moves. 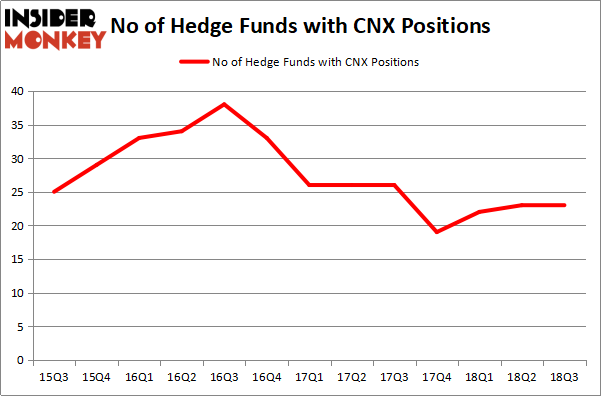 Of the funds tracked by Insider Monkey, Mason Hawkins’s Southeastern Asset Management has the largest position in CNX Resources Corporation (NYSE:CNX), worth close to $719.9 million, accounting for 8.6% of its total 13F portfolio. The second largest stake is held by AQR Capital Management, managed by Cliff Asness, which holds a $84.9 million position; the fund has 0.1% of its 13F portfolio invested in the stock. Remaining professional money managers with similar optimism consist of David Einhorn’s Greenlight Capital, Israel Englander’s Millennium Management and Peter Rathjens, Bruce Clarke and John Campbell’s Arrowstreet Capital.

Seeing as CNX Resources Corporation (NYSE:CNX) has faced bearish sentiment from the smart money, logic holds that there was a specific group of hedgies that slashed their full holdings heading into Q3. It’s worth mentioning that Peter Muller’s PDT Partners dropped the largest stake of the “upper crust” of funds followed by Insider Monkey, comprising close to $7.2 million in stock. David Costen Haley’s fund, HBK Investments, also cut its stock, about $1.5 million worth. These transactions are interesting, as total hedge fund interest stayed the same (this is a bearish signal in our experience).

View table here if you experience formatting issues.
As you can see these stocks had an average of 19 hedge funds with bullish positions and the average amount invested in these stocks was $199 million. That figure was $951 million in CNX’s case. Penn National Gaming, Inc (NASDAQ:PENN) is the most popular stock in this table. On the other hand Altair Engineering Inc. (NASDAQ:ALTR) is the least popular one with only 13 bullish hedge fund positions. CNX Resources Corporation (NYSE:CNX) is not the most popular stock in this group but hedge fund interest is still above average. This is a slightly positive signal but we’d rather spend our time researching stocks that hedge funds are piling on. In this regard PENN might be a better candidate to consider a long position.