Does Cerus Corporation (NASDAQ:CERS) represent a good buying opportunity at the moment? Let’s briefly check the hedge fund interest towards the company. Hedge fund firms constantly search out bright intellectuals and highly-experienced employees and throw away millions of dollars on research activities, so it is no wonder why they tend to generate millions in profits each year. It is also true that some hedge fund players fail unconceivably on some occasions, but their stock picks have been generating superior risk-adjusted returns on average over the years.

Is Cerus Corporation (NASDAQ:CERS) a buy, sell, or hold? The best stock pickers are becoming more confident. The number of bullish hedge fund positions rose by 2 recently. Our calculations also showed that CERS isn’t among the 30 most popular stocks among hedge funds. CERS was in 18 hedge funds’ portfolios at the end of September. There were 16 hedge funds in our database with CERS holdings at the end of the previous quarter.

What have hedge funds been doing with Cerus Corporation (NASDAQ:CERS)?

At Q3’s end, a total of 18 of the hedge funds tracked by Insider Monkey held long positions in this stock, a change of 13% from one quarter earlier. On the other hand, there were a total of 8 hedge funds with a bullish position in CERS at the beginning of this year. With hedge funds’ capital changing hands, there exists a select group of notable hedge fund managers who were adding to their stakes substantially (or already accumulated large positions). 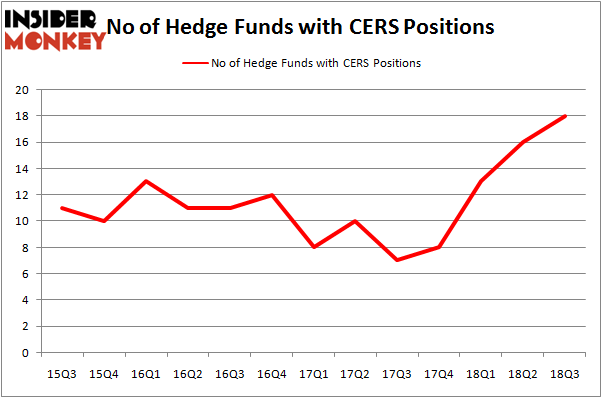 More specifically, Baker Bros. Advisors was the largest shareholder of Cerus Corporation (NASDAQ:CERS), with a stake worth $77.5 million reported as of the end of September. Trailing Baker Bros. Advisors was Rima Senvest Management, which amassed a stake valued at $15.1 million. Driehaus Capital, GLG Partners, and D E Shaw were also very fond of the stock, giving the stock large weights in their portfolios.

As one would reasonably expect, some big names were leading the bulls’ herd. HBK Investments, managed by David Costen Haley, established the biggest position in Cerus Corporation (NASDAQ:CERS). HBK Investments had $0.8 million invested in the company at the end of the quarter. Jim Simons’s Renaissance Technologies also initiated a $0.5 million position during the quarter. The other funds with new positions in the stock are Jerome Pfund and Michael Sjostrom’s Sectoral Asset Management and Paul Tudor Jones’s Tudor Investment Corp.

As you can see these stocks had an average of 8.5 hedge funds with bullish positions and the average amount invested in these stocks was $50 million. That figure was $135 million in CERS’s case. Exterran Corporation (NYSE:EXTN) is the most popular stock in this table. On the other hand Wins Finance Holdings Inc. (NASDAQ:WINS) is the least popular one with only 1 bullish hedge fund positions. Cerus Corporation (NASDAQ:CERS) is not the most popular stock in this group but hedge fund interest is still above average. This is a slightly positive signal but we’d rather spend our time researching stocks that hedge funds are piling on. In this regard EXTN might be a better candidate to consider a long position.