Our extensive research has shown that imitating the smart money can generate significant returns for retail investors, which is why we track more than 700 prominent money managers and analyze their quarterly 13F filings. The stocks that are heavily bought by hedge funds historically outperformed the market, though there is no shortage of high profile failures like hedge funds’ recent losses in Facebook. Let’s take a closer look at what the funds we track think about Caterpillar Inc. (NYSE:CAT) in this article.

Caterpillar Inc. (NYSE:CAT) has experienced an increase in hedge fund sentiment recently. Our calculations also showed that CAT isn’t among the 30 most popular stocks among hedge funds.

How have hedgies been trading Caterpillar Inc. (NYSE:CAT)? 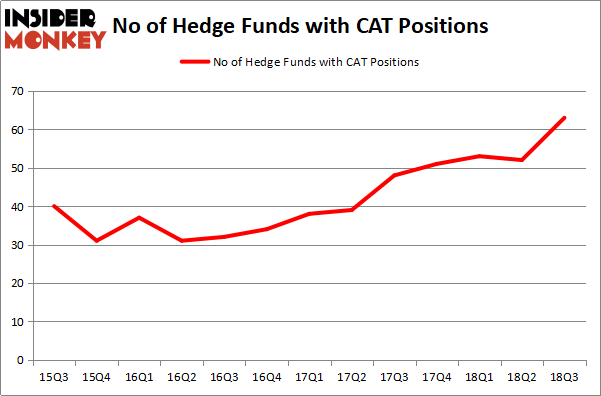 The largest stake in Caterpillar Inc. (NYSE:CAT) was held by Bill & Melinda Gates Foundation Trust, which reported holding $1717.2 million worth of stock at the end of September. It was followed by Citadel Investment Group with a $266.9 million position. Other investors bullish on the company included Impala Asset Management, Adage Capital Management, and AQR Capital Management.

Let’s now review hedge fund activity in other stocks – not necessarily in the same industry as Caterpillar Inc. (NYSE:CAT) but similarly valued. These stocks are ConocoPhillips (NYSE:COP), Rio Tinto plc (NYSE:RIO), Diageo plc (NYSE:DEO), and U.S. Bancorp (NYSE:USB). All of these stocks’ market caps are closest to CAT’s market cap.

As you can see these stocks had an average of 32.25 hedge funds with bullish positions and the average amount invested in these stocks was $2865 million. That figure was $4029 million in CAT’s case. ConocoPhillips (NYSE:COP) is the most popular stock in this table. On the other hand Diageo plc (NYSE:DEO) is the least popular one with only 15 bullish hedge fund positions. Compared to these stocks Caterpillar Inc. (NYSE:CAT) is more popular among hedge funds. Considering that hedge funds are fond of this stock in relation to its market cap peers, it may be a good idea to analyze it in detail and potentially include it in your portfolio.