The market has been volatile as the Federal Reserve continues its rate hikes to normalize the interest rates. Small cap stocks have been hit hard as a result, as the Russell 2000 ETF (IWM) has underperformed the larger S&P 500 ETF (SPY) by about 4 percentage points through November 16th. SEC filings and hedge fund investor letters indicate that the smart money seems to be paring back their overall long exposure since summer months, and the funds’ movements is one of the reasons why the major indexes have retraced. In this article, we analyze what the smart money thinks of Catchmark Timber Trust Inc (NYSE:CTT) and find out how it is affected by hedge funds’ moves.

Catchmark Timber Trust Inc (NYSE:CTT) was in 12 hedge funds’ portfolios at the end of September. CTT has experienced a decrease in enthusiasm from smart money in recent months. There were 13 hedge funds in our database with CTT positions at the end of the previous quarter, not enough to be considered one of the 30 most popular stocks among ALL hedge funds.

If you’d ask most shareholders, hedge funds are perceived as underperforming, old financial tools of years past. While there are over 8000 funds trading today, We look at the moguls of this group, about 700 funds. These investment experts orchestrate most of the smart money’s total asset base, and by following their matchless investments, Insider Monkey has spotted a number of investment strategies that have historically exceeded the broader indices. Insider Monkey’s flagship hedge fund strategy surpassed the S&P 500 index by 6 percentage points annually since its inception in May 2014 through early November 2018. We were able to generate large returns even by identifying short candidates. Our portfolio of short stocks lost 26.1% since February 2017 even though the market was up nearly 19% during the same period. We just shared a list of 11 short targets in our latest quarterly update.

What have hedge funds been doing with Catchmark Timber Trust Inc (NYSE:CTT)? 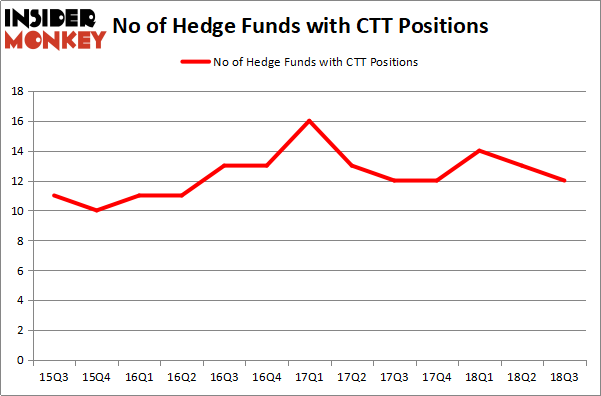 Among these funds, Renaissance Technologies held the most valuable stake in Catchmark Timber Trust Inc (NYSE:CTT), which was worth $25.6 million at the end of the third quarter. On the second spot was Impax Asset Management which amassed $15.4 million worth of shares. Moreover, Huber Capital Management, Vertex One Asset Management, and D E Shaw were also bullish on Catchmark Timber Trust Inc (NYSE:CTT), allocating a large percentage of their portfolios to this stock.

Judging by the fact that Catchmark Timber Trust Inc (NYSE:CTT) has experienced a decline in interest from the entirety of the hedge funds we track, it’s easy to see that there is a sect of money managers that decided to sell off their positions entirely heading into Q3. Interestingly, Dmitry Balyasny’s Balyasny Asset Management said goodbye to the biggest stake of all the hedgies followed by Insider Monkey, worth close to $0.4 million in stock. Alec Litowitz and Ross Laser’s fund, Magnetar Capital, also sold off its stock, about $0.2 million worth. These bearish behaviors are intriguing to say the least, as total hedge fund interest fell by 1 funds heading into Q3.

As you can see these stocks had an average of 6.25 hedge funds with bullish positions and the average amount invested in these stocks was $18 million. That figure was $57 million in CTT’s case. Neuronetics, Inc. (NASDAQ:STIM) and Cambium Learning Group, Inc. (NASDAQ:ABCD) are the most popular stocks in this table. On the other hand, First Community Bancshares Inc (NASDAQ:FCBC) is the least popular one with only 4 bullish hedge fund positions.