Is Cardinal Health, Inc. (NYSE:CAH) an attractive investment today? Prominent investors are in a bearish mood. The number of long hedge fund positions went down by 1 in recent months. Our calculations also showed that CAH isn’t among the 30 most popular stocks among hedge funds. CAH was in 27 hedge funds’ portfolios at the end of the third quarter of 2018. There were 28 hedge funds in our database with CAH holdings at the end of the previous quarter.

To the average investor there are plenty of gauges shareholders put to use to evaluate publicly traded companies. Two of the less known gauges are hedge fund and insider trading moves. Our researchers have shown that, historically, those who follow the best picks of the elite money managers can trounce the broader indices by a significant margin (see the details here).

What have hedge funds been doing with Cardinal Health, Inc. (NYSE:CAH)? 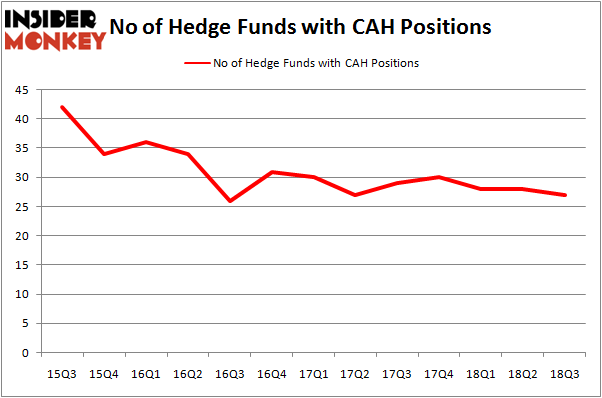 More specifically, Baupost Group was the largest shareholder of Cardinal Health, Inc. (NYSE:CAH), with a stake worth $255.9 million reported as of the end of September. Trailing Baupost Group was Pzena Investment Management, which amassed a stake valued at $140.2 million. Renaissance Technologies, D E Shaw, and Two Sigma Advisors were also very fond of the stock, giving the stock large weights in their portfolios.

Due to the fact that Cardinal Health, Inc. (NYSE:CAH) has witnessed bearish sentiment from the aggregate hedge fund industry, it’s safe to say that there exists a select few money managers who were dropping their entire stakes heading into Q3. At the top of the heap, Glenn Russell Dubin’s Highbridge Capital Management dropped the biggest stake of the 700 funds watched by Insider Monkey, worth an estimated $3.5 million in stock, and Dmitry Balyasny’s Balyasny Asset Management was right behind this move, as the fund sold off about $3.2 million worth. These bearish behaviors are important to note, as aggregate hedge fund interest fell by 1 funds heading into Q3.

View table here if you experience formatting issues.
As you can see these stocks had an average of 25.25 hedge funds with bullish positions and the average amount invested in these stocks was $975 million. That figure was $1.08 billion in CAH’s case. SVB Financial Group (NASDAQ:SIVB) is the most popular stock in this table. On the other hand Principal Financial Group Inc (NYSE:PFG) is the least popular one with only 15 bullish hedge fund positions. Cardinal Health, Inc. (NYSE:CAH) is not the most popular stock in this group but hedge fund interest is still above average. This is a slightly positive signal but we’d rather spend our time researching stocks that hedge funds are piling on. In this regard SIVB might be a better candidate to consider a long position.