Does BorgWarner Inc. (NYSE:BWA) represent a good buying opportunity at the moment? Let’s briefly check the hedge fund interest towards the company. Hedge fund firms constantly search out bright intellectuals and highly-experienced employees and throw away millions of dollars on research activities, so it is no wonder why they tend to generate millions in profits each year. It is also true that some hedge fund players fail unconceivably on some occasions, but their stock picks have been generating superior risk-adjusted returns on average over the years.

BorgWarner Inc. (NYSE:BWA) was in 22 hedge funds’ portfolios at the end of September. BWA investors should be aware of a decrease in activity from the world’s largest hedge funds lately. There were 24 hedge funds in our database with BWA holdings at the end of the previous quarter. Our calculations also showed that BWA isn’t among the 30 most popular stocks among hedge funds.

How have hedgies been trading BorgWarner Inc. (NYSE:BWA)?

At the end of the third quarter, a total of 22 of the hedge funds tracked by Insider Monkey held long positions in this stock, a change of -8% from one quarter earlier. Below, you can check out the change in hedge fund sentiment towards BWA over the last 13 quarters. So, let’s examine which hedge funds were among the top holders of the stock and which hedge funds were making big moves. 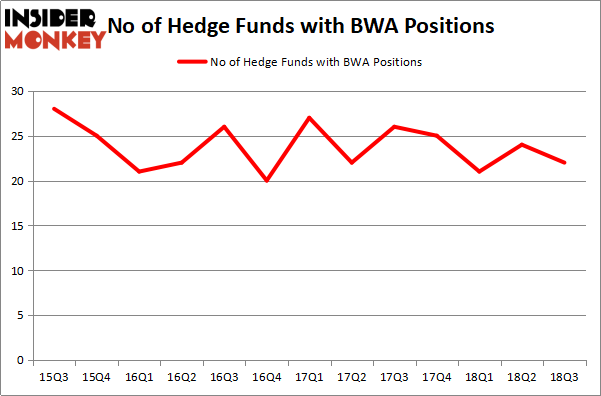 Among these funds, Diamond Hill Capital held the most valuable stake in BorgWarner Inc. (NYSE:BWA), which was worth $389.7 million at the end of the third quarter. On the second spot was Ariel Investments which amassed $72.6 million worth of shares. Moreover, Point72 Asset Management, D E Shaw, and Citadel Investment Group were also bullish on BorgWarner Inc. (NYSE:BWA), allocating a large percentage of their portfolios to this stock.

Seeing as BorgWarner Inc. (NYSE:BWA) has witnessed falling interest from the entirety of the hedge funds we track, it’s safe to say that there were a few fund managers that elected to cut their entire stakes heading into Q3. At the top of the heap, Ian Simm’s Impax Asset Management dumped the biggest position of all the hedgies tracked by Insider Monkey, comprising about $18.2 million in stock, and Matthew Tewksbury’s Stevens Capital Management was right behind this move, as the fund dropped about $4 million worth. These bearish behaviors are interesting, as aggregate hedge fund interest dropped by 2 funds heading into Q3.

As you can see these stocks had an average of 15.25 hedge funds with bullish positions and the average amount invested in these stocks was $265 million. That figure was $725 million in BWA’s case. Pinnacle West Capital Corporation (NYSE:PNW) is the most popular stock in this table. On the other hand iShares MSCI ACWI Index Fund (NASDAQ:ACWI) is the least popular one with only 8 bullish hedge fund positions. Compared to these stocks BorgWarner Inc. (NYSE:BWA) is more popular among hedge funds. Considering that hedge funds are fond of this stock in relation to its market cap peers, it may be a good idea to analyze it in detail and potentially include it in your portfolio.

Hedge Funds Are Betting On Papa John’s International, Inc. (PZZA)
Monthly Newsletter Strategy
Download a free copy of our newsletter and see the details inside!
Hedge Fund Resource Center
Related News
Are Hedge Funds Right About BorgWarner Inc. (BWA)? Why Are These 4 Stocks Having Such a Poor Trading Day? Is BorgWarner Inc. (BWA) Going to Burn These Hedge Funds? Insiders Cut Exposure to These Companies Amid Growing Global Economic Concerns Hedge Funds Were Right about Remy International, Inc. (REMY) Autoliv Inc. (ALV): Are Hedge Funds Right About This Stock? Hedge Funds Are Betting On LKQ Corporation (LKQ) Five Reasons You Need a Day-Trading Mentor 15 Most Important Medical Discoveries of 2018 The 10 Best Islands to Visit in 2019
Billionaire Hedge Funds